Sonia Gandhi is deeply hurt by the death of terrorists, that is why Congress calls Army chief ‘Goonda’

Brinda Karat criticizes Army chief; But her own party refused to donate blood to Indian Army during the 1962..

Since Yogi Adityanath became the CM of Uttar Pradesh, the paid media is eating crow with a grudge! Earlier, Indians knew him only for his controversial sound bites, thanks to them.  Now Yogi has shut the mouths of the hostile media by his jet speed work with astounding efficiency.

The frustration of the paid Media is evident by the pointless issues they attempt to raise against Yogi. Closure of Tunday Kababi restaurant for two hours was propagated as a National Emergency! Closure of ILLEGAL slaughter houses was a crisis. Depriving the youngsters of Eve-teasing through Anti-Romeo Squad was an attack on ‘Love’! Yeah, sexual harassment of young girls is ‘Love’ for these journos!

All the world loves a lover, says @ravishndtv, India is the only country in the world that has "Anti-Romeo squads" #KalingaLitFest

But Tavleen Singh, one of the most vocal haters of CM Yogi set an unbeatable benchmark in cheapness yesterday. The Indian Express Journalist Tavleen Singh , tried to insult Yogi Adityanath  by tweeting a fake photo. In the repulsive photo shopped image, Yogi Adityanath is shown drinking urine of cow (Gaumutra) directly from its urethra. This Pseudo Intellectual hit a new low to draw attention of Indians. Well, she was successful. More than 1500 replies and quotes poured in condemning her disgusting mentality. 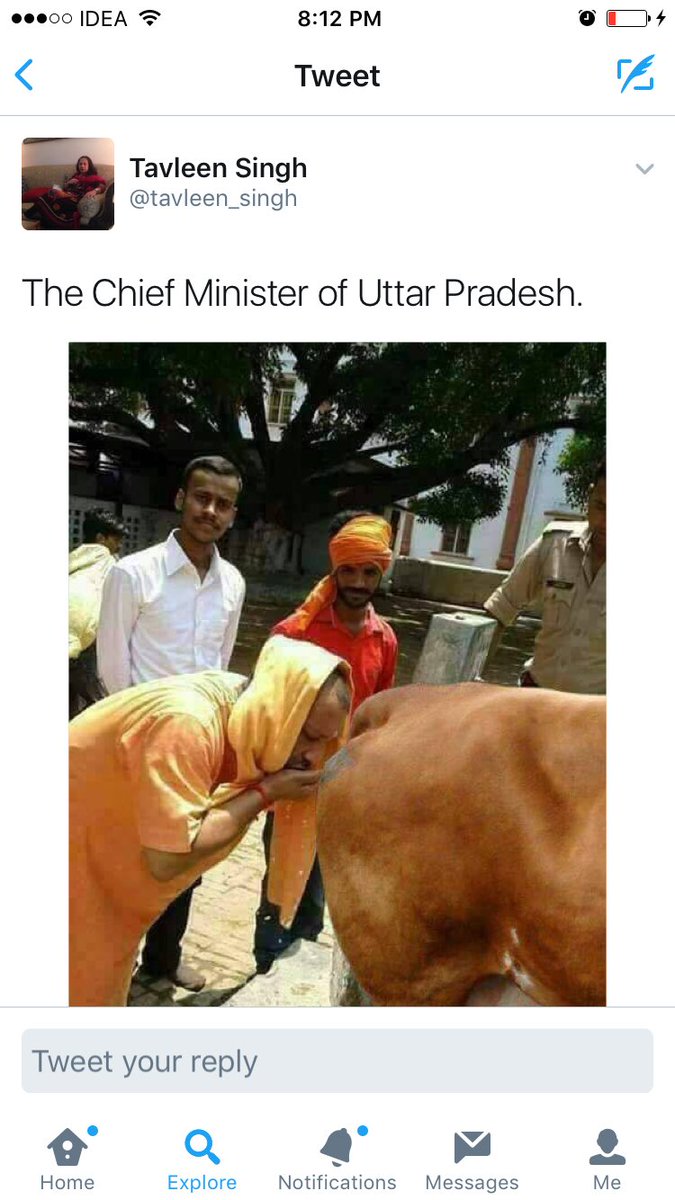 More than thousand people informed her that the image was a fake one. Many people posted the original photo of Yogi drinking water from a bore well in their replies. But the stubborn Tavleen did not delete her tweet, neither did she apologize for hurting the sentiments of millions of Yogi Supporters and cow worshipping Hindus.

Have some shame Tavleen. pic.twitter.com/9FFH5Vniri

When hugely criticized and condemned for posting a fake photo, she lost her guts to boldly state the truth that she just intended to insult CM Yogi. So, she played innocent in ignorance for a while.

No. I thought cow's urine was sacred for Hindus and thought it was a genuine picture. Is it not sacred? https://t.co/xekGSBFYRb

After grabbing all the negative attention greedily, she did the most obvious thing- to play a victim card.

Tavleen has tried this formula before. Hurting the sentiments of people, attracting their wrath and playing a victim card by calling them ‘Trolls’. This formula always works. Many paid journalists use this formula to stay in news.

Thankfully, a police complaint has been booked against Tavleen Singh by UP Police after receiving a complaint on Twitter.

Hurting Hindu sentiments is a ‘liberal’ fashion in India. Response of hurt Hindus is ‘Communal’ troll in India.  A Hindu Yogi ruling a big state like UP is definitely an eyesore for these paid media persons.  And when they can’t pinpoint his shortcomings, they choose such nasty ways to humiliate him. Such is the bankruptcy of these journalists. Shame!

Well, the irony is that this is the same Yogi who helps these deranged journalists with some TRP, now and then!