Aurangzeb, the fanatic Islamic emperor of India, imposed a “Jaziya” tax on the Hindus, in the year 1679(April 2nd). Historically, the Jaziya tax has been understood in Islam as a fee for protection provided by the Muslim ruler to non-Muslims for the exemption from military service for non-Muslims, for the permission to practice a non-Muslim faith with some communal autonomy in a Muslim state, and as material proof of the non-Muslims’ submission to the Muslim state and its laws.

No distinction was made in favour of officials, clerks or soldiers. Every Hindu was required to pay the Jaziya personally. The tax was a heavy burden on the poor especially. There was a lot of humiliation and harassment made all the poor, middle and upper classes to go for the payment of the Jaziya.

There was mass protest against the imposition of Jaziya in Delhi in 1679, and opposition to the tax in some form or other continued till almost the end of Aurangzeb’s reign (1707 A.D.). Here there is a letter written by Shivaji to the Mughal emperor Aurangzeb protesting against imposition of the “jaziya” tax. The letter will itself illustrate the conditions under which Jaziya was imposed, the discrimination it introduced on the basis of religion and how it contradicted the philosophy of Islam itself!

Below is the Letter which Chatrapati Shivaji Maharaj wrote to Aurangzeb

To the Emperor Alamgir –

“This firm and constant well-wisher Shivaji, after rendering thanks for the grace of God and the favours of the Emperor, – which are clearer than the Sun, -begs you to inform your Majesty that, although this well-wisher was led by his adverse Fate to come away from your august Presence without taking leave, yet he is ever ready to perform, to the fullest extent possible and proper, everything that duty as a servant and gratitude demand of him….

My excellent services and devotion to the welfare of the (Mughal) State are fully known to the Princes, Khans, Amirs, Rajas and the Rais of India, to the rulers of Persia, Central Asia, Turkey and Syria, to the inhabitants of the seven climes of the globe, and to wayfarers on land and sea; and very likely their light has flashed on your Majesty’s capacious mind. So, with a view to rendering good service and earning the Imperial favour, I submit the following words in a spirit of devotion to the public welfare.

It has recently come to my ears that, on the ground of the war with me having exhausted your wealth and emptied the imperial treasury, Your Majesty has ordered that money under the name of Jaziya should be collected from the Hindus and the Imperial needs supplied with it. May it please your Majesty! that architect of the fabric of (Mughal) empire, [Jalal-ud-din] Akbar Padishah, reigned with full power for 52 [lunar] years. He adopted the admirable policy of universal harmony (sulh-i-kul) in relation to all the various sects, such as Christians, Jews, Muslims, Dadu’s followers, sky-worshippers (falakia), malakia, materialists (ansaria), atheists (daharia), Brahmans and Jain priests. The aim of this liberal heart was to cherish and protect all the people. So he became famous under the title of the World’s spiritual guide ‘Jagat Guru’. (A few words in praise of Emperors Jahangir and Shah Jahan and regret on Aurangzeb’s failure to follow their political system) …..

They, too, had the power of levying the Jaziya; but they did not give place to bigotry in their hearts, as they considered all men, high and low, created by God, to be [living] examples of the nature of diverse creeds and temperaments….. Prosperity is the fruit of one’s intentions. Therefore, their wealth and good fortune continued to increase. But in your Majesty’s reign, many of the forts and provinces have gone out of your possession, and the rest will soon do so, too, because there will be no slackness on my part in ruining and devastating them. Your peasants are down-trodden; the yield of every village has declined ….. It is a reign in which the army is in a ferment, the merchants complain, the Muslims cry, the Hindus are grilled, most men lack bread at night, and in the day-time inflame their own cheeks by slapping them [in anguish]. How can the royal spirit permit you to add the hardship of the Jaziya to this grievous state of things? The infamy will quickly spread from west to east and become recorded in books of history that the Emperor of Hindustan, coveting the beggar’s bowls, takes Jaziya from Brahmans and Jain monks, yogis, sannyasis, bairagis, paupers, mendicants, ruined wretches, and the famine-stricken.

“May it please your Majesty! If you believe in the true Divine Book and Word of God (i.e. the Quran) you will find there [that God is styled] Rabb-ul-alamin, the Lord of all men, and not Rabb-ul-Musalmin, the Lord of the Muhammadans only. Verily, Islam and Hinduism are terms of contrast. They are [diverse pigments[ used by the true Divine Painter for blending the colours and filling in the outlines [of His picture of the entire human species]. If it be a mosque the call to prayer is chanted in remembrance of Him. If it be a temple, the bell is rung in yearning for Him only. To show bigotry for any man’s creed and practices is equivalent to altering the words of the Holy Book ….. In strict justice the jaziya is not at all lawful ….. Apart from its injustice, this imposition of the Jaziya is an innovation in India and inexpedient ….. I wonder at the strange fidelity of your officers that they neglect to tell you of the true state of things, but cover a blazing fire with straw! May the Sun of your royalty continue to shine above the horizon of greatness!” (Sarkar, History of Aurangzeb, iii). 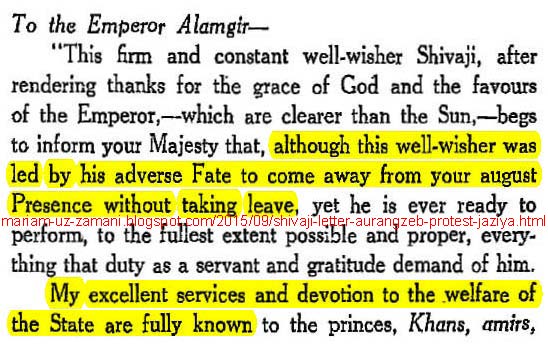 MyGov - A portal for effective governance!

Barkha Dutt knows biodata of a terrorist, but doesn't know the Presidential candidate of India!