Prostitution originated along with the origin of mankind!!! Here’s a brief history of sex trade in India

Did Goa CM Manohar Parrikar really ask girls not to drink beer? Here is the reality which is hidden..

Prostitution originated along with the..

Even ancient Hindu Scriptures states that the forefathers of the Hindus came down in successive waves from Eastern Siberia (Uttara Kuru). Even now, the major tribes in Eastern Siberia bear virtually the same names as the three major grass-roots Indian groups: Saka, Buryat, and Yakuts. In India, they became the Saka (Scythians), Bharats, and Yakhu-Deva (Now the Yadavas). This is a direct link to Sri Krishna and his Dwaraka from the times of Mahabharata.

Does this mean, this place in Siberia is the same “Dwaraka of Lord Krishna”? This mystery behind the “Por Bajin of Siberia” is yet to be solved, though it is believed to be the same Dwaraka, mentioned in the ancient epic of Mahabharata. About a hundred years ago an archaeological site by the name ‘Por-Bajin’, also spelt ‘Por Bayzn’ was discovered in the Tere-Kol Lake, located across the Altai Mountain Range in Tuva, Southern Siberia. The secret of the fort at Tere Kol Lake in Por Bajin has never been solved. But the answer to some questions may lie in the name ‘Por Bajin’ itself and in the name of a city mentioned in the annals of ancient Indian history and literature.

Lt. Col James Tod, the Political Agent of the East India Company, who was stationed in India in the latter part of the eighteenth century, having befriended the Maharaja of Jaisalmer, gained access to the ancient annals of Rajasthan and western India that had been handed down to the Maharaja from his ancestors. James Tod researched the ancient literature and in 1790 summarized his findings in “Annals and Antiquities of Rajasthan”, which is now regarded as one of the major works that the British produced during their reign in India. 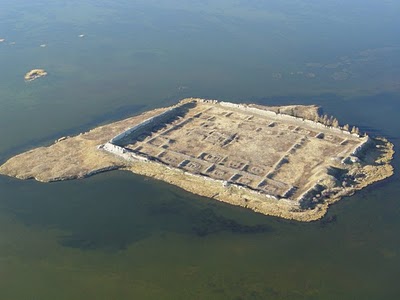 In his study, Tod found that the ‘Yadhu Tribe’, of whom Sri Krishna was the most prominent member and his three sons, spread the Yadhu empire westward and also up north beyond the geographical boundaries of present day India. One of the cities that was conquered by the Yadhu tribe was Vajra-pur, later called Bajra-pur. The city was known to have been surrounded by a lake.

As per various ancient Indian sources, Sri Krishna’s son “Pradyamna” is known to have extended the Yadhu Empire north of what is present day India. He had attacked the city of Vajrapura and defeated King Vajranabha. Later a truce was called and Pradyamna married the king’s daughter Prabhavati. The poetic versions of this war say that Pradyamna is transported by geese to a land far away.

Is it possible that ‘Por-Bajin’ is a distortion of ‘Pur-Bajra’ – or ‘Bajra Pur’ in reverse? As mentioned above, the more correct sound ‘Vajra’ is commonly pronounced ‘Bajra’. In Sanskrit, ‘Vajra’ means ‘impenetrable’, ‘Pur’ means a city. Archaeologists at ‘Por Bajin’ have described the structure as an almost ‘impenetrable fortress’.
Until now, the archaeologists have dated Por-Bajin site to only 8th century AD, but have not been able to figure out much else about it. Is ‘Por Bajin’ the Yadhu city that was established by Sri Krishna’s sons in Southern Siberia? Could it be that traces of the city of the Yadhus still exist somewhere deep among the ruins of ‘Por-Bajin’?

look at ancient Dwaraka, the city from where Sri Krishna ruled and was built prior to Bajra-Pur, may reveal the answer. Dwarkas located off the coast of Gujarat is now submerged. What is uncanny though is the close resemblance of the foundation structure of Dwarka to that of Por Bajin.

Aerial views of Por Bajin are almost identical to that of the description of Dwarka in Indian scriptures. Though artifacts found at Por Bajin have been currently dated to no earlier than medieval times, and though they reveal some links to China, but it is also evident that if there were links to the Yadhu tribe of India, then the medieval structures that exist today at the site were constructed above or on top of what was built by the Yadhus in about 3000- 4000 BC. However, the foundations must even today be the same as that of the earliest structure.

Others have contended that ‘Sibir’ means ‘camp’. Archaeologists have conjectured that, in antiquity, Por-Bajin was possibly used only as a summer residence or a camp, given the extreme weather conditions of Siberia. Some have therefore contended that the name of Siberia in ancient Indian texts is ‘Shibir’, in reference to the temporary ‘camps’ that were set up there by travellers, but this view is not accepted for lack of authenticity.

Some consider Por Bajin stronghold to be a temple and call it ‘Russian Shaolin’. Others believe that this construction serves as the northern gates to sacred place Shambala.