BIG EXPOSE! Was the Previous..

Miss use of power can be perfectly done by only one dynasty in India and it is Gandhi dynasty. Till date, we knew that Gandhi family during the UPA government had used their power to loot Indians and help terrorists. But today, you will know how Sonia Gandhi used her power to save a rapist.

Tarun Tejpal, a man who was caught in a rape case in the year 2013, is all set to spend rest of his life in jail for raping a colleague. But now this man is exposed of having links with Sonia Gandhi. This man had done a great favour to the Congress party by framing BJP leaders in fake cases.

When several cases were filed against this man and the investors of the magazine ‘Tehelka’, Sonia Gandhi did all possible favours to save him and this was exposed when one of a letter of Sonia Gandhi got leaked.

How and when Sonia Gandhi helped this rapist?

Just after 4 months of forming UPA government in the year 2004, Sonia Gandhi was found influencing the probe agencies. She had instructed the then Finance Minister of India, Chidambaram after the Tehelka financiers were quizzed by the investigation agencies.

Here is the letter written by Sonia Gandhi to P Chidambaram!!! 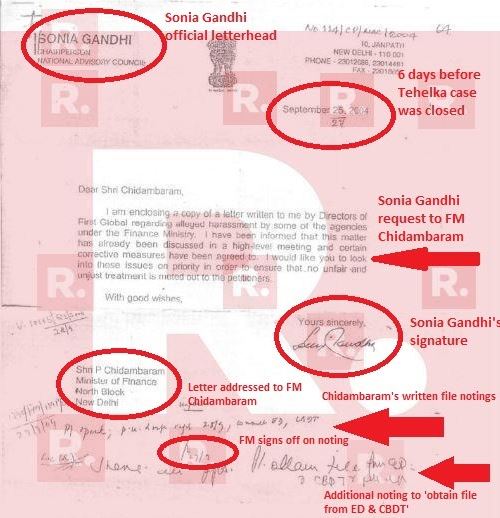 Withdraw all the cases against Tarun Tejpal!!! Ordered Sonia Gandhi to the then Prime Minister of India

Yes, Sonia Gandhi in another letter had ordered Mr Manmohan Singh (he was India’s Prime Minister) to withdraw all the cases against the womaniser Tarun Tejpal and the funders of his Tehelkar.com. As expected, Mr Manmohan Singh responded back saying that he will oblige to her words. Wow, a Prime Minister acting on the orders of a dynasty politician.

“I have received your letter of June 18, 2004 enclosing a representation from Shri Tarun Tejpal, Editor-in-Chief of Tehelka regarding investigations pending against them. I am asking the concerned Ministries to examine the cases and review their status and proposed course of action” responded Manmohan Singh to Sonia Gandhi.

Can you imagine … PM of world's largest democracy is obliged to save a rapist ? #SoniaTejpalQuidPro #SoniaLetterLeaked pic.twitter.com/CLhWvRuK6E

Dr Subramanian Swamy urged the Enforcement Directorate (ED) to file a money laundering case against Sonia Gandhi for helping ‘First Global’ to escape after involving in the fraudulent financial transactions done by them.

Indians were never failed, but Corrupt-dynasty, who ruled this nation made us to fail, by using corrupt-medias #SoniaTejpalQuidProQuo

#SoniaLetterLeaked is an evidence of rotten ecosystem of Congress & fake liberals.
Why Sonia Gandhi was trying to save a rapist??? https://t.co/Pe3tCJAfcq