When Mughal King Aurangzeb ordered to demolish temples, do you know what was done to destroy the fear of..

India increasingly sees its role across the Indian Ocean as a “net provider of regional security” and, like US, is a votary of freedom of navigation: Alyssa Ayres

Ms. Ayres, who is now a senior fellow with the Council on Foreign Relations and the author of the recently-published, Our Time Has Come: How India is Making Its Place in the World speaking at the Asia Society “India 2018” a look at the year ahead.

“India increasingly sees its role across the Indian Ocean as a “net provider of regional security, which is echoed by the US Secretaries of Defence and State when they talk about its role in the region”, said Alyssa Ayres, a former Deputy Assistant Secretary of State for South Asia.

“There is a transformation of the way the Indian Navy talks about the seas, from using the seas to securing the seas — this whole idea of New Delhi now playing a role in protecting the freedom of navigation as opposed to just the sea-lanes that the Indian Navy uses,” she said.

Beyond securing the critical Indian Ocean sea lanes, however, the Navy has also had to deal with a sharp uptick in irregular threats in India’s near-seas. Ever so often, the mission has involved combating extra-regional influence in India’s maritime neighbourhood through subtle power projection.

As a corollary, there has been a growing clamour for the infusion of superior knowhow in naval systems to preserve Indian Navy’s combat edge. India’s maritime analysts have been worried about the deployment of Chinese warships and nuclear submarines in India’s near-seas.

The anxiety has been heightened by South Asia’s emergence as a theatre of geopolitical contestation, leading to urgent calls within the Indian strategic community to speed up India’s modernization. Asia’s murky power politics has highlighted the strategic imperative of robust maritime presence operations in the near-littorals.
The strategic nature of threats has underscored the importance of technology in expanding naval offensive and defensive capabilities. Despite expanding its combat prowess, the Indian Navy has grappled with systemic deficiencies and delays in shipbuilding projects.

Maritime observers are convinced that a high-stakes technological contest is unfolding in the Asian littorals. It involves growing attempts by rival powers to acquire modern capability for effective posturing at sea. These include precision-guided missiles, advanced intelligence, surveillance equipment and autonomous systems. The push towards advanced munitions, unmanned combat vehicles, quantum computing technology and hypersonic, has led many to contemplate new kinds of warfare scenarios involving cyber, space and energy weapons. 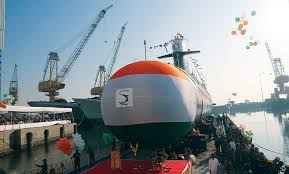 When thinking about the strategic future, there is concern about China’s activities in East and Southeast Asia, the expert said.

As a result, the US and India share an interest in ensuring that the sea-lanes remain open. “India like the US is a vocal advocate of freedom of navigation,” she said. “The US and India are both very focused on this issue.”

“What you have seen in the last four-five months is an increasing convergence, where [President Donald] Trump’s administration has picked up what the Indian, the Japanese and the Australian government talk about, a concept of the Indo-Pacific region,” she said.

While the US traditionally spoke of the Asia-Pacific region, the Australians, Japanese and Indian leaders had a broader concept of the Indo-Pacific region, Ms. Ayres added.

India Navy has ambitions to acquire and develop technologies in many crucial areas. Going forward, military scientists will need to show progress with high-definition radars, infrared seekers, precision munitions and energy weapons. It will be important to build these weapons under license, for which both government and private industry will need to spend more on research and development. The critical task will be to expand research and development to a level where India maritime technological initiatives become self-sustaining.