This University is well known to all, not for its educational milestones, but for its anti National activities, violence, protests and goon students. It cannot be other than Jawaharlal Nehru University. Recently, there was a big debate regarding the compulsory attendance rule imposed in the university. The students of left organisation out rightly rejected the compulsory attendance system and said students should have freedom to attend class only if they like.

This is the most bizarre argument ever heard! Every college and universities have a set of rules which students are bound to follow. This is not to curb their freedom but to develop discipline and punctuality in students. Kids join schools and colleges to educate themselves and learn something, if there is no discipline in an educational institute, where exactly should the kids learn?!

But seems like JNU has special idea. These JNU students from left affiliated groups do not want compulsory attendance mainly because it will restrict them from going to protests and strikes which they are always involved in. 90% of the time we have seen people like Kanhaiya Kumar, Umar Khalid and his friends on streets than in class rooms. So obviously they are miffed with the decision.

They took out protests in the campus to which JNU teacher’s association and JNU Students Union also extended their support. One should not be surprised with teacher’s stand as most the teachers in JNU have left affiliation and are well known to use students for political activities.

The question here is, if these students are not interested to attend classes, then why did they join university? Why are they wasting tax payers money on their scholarships, stipend, hostel fee and food? There are thousands of students in India who wish to study but have failed to get financial support from government, why not give opportunity to those people?! 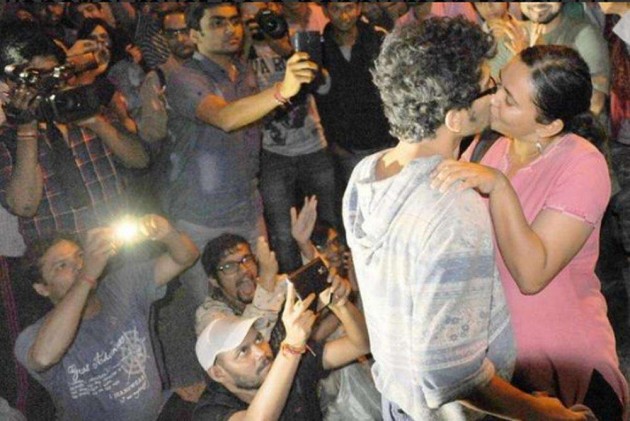 This is what students are doing in JNU campus in the name of education!

The JNU has a history where students overstay in hostels even after their term in over, they utilize all benefits of government and then speak against the country, should such people be allowed to stay in university? It has been over 7-8 years since Kanhaiya Kumar joined as a PhD student but he still hasn’t completed the course. It is the government which is paying for all his comfort and shouldn’t there be a a time restriction to complete their course?! No university in India permits anyone to prolong PhD for more than 7 years. Move over seven years (5+2) is given only during unavoidable circumstances. There are many examples like Kanhaiya Kumar who are in the campus for over 7 years enjoying government benefits and happily using the campus for their political goals.

This is exactly the reason why these students do not want compulsory attendance which will make them answerable to the administration. They have turned the campus into a political hub and using students as pawns for their vested interests. There were many reports which said many left ideologist teachers have threatened students if they fail to support their narrative and used them to spew venom against each other. So, it is indeed an expected step by the JNU students and teachers to oppose attendance system.

Well it is our fault that we have given them space in universities spoiling the entire environment and demoralizing the ones who have come to study!!! Subramanian Swamy back fires at NDTV and Prannoy Roy! Show no mercy on this corrupt news channel, appeals to PM Modi Jignesh Mevani reveals that Rahul Gandhi will be kicked out of Amethi constituency by his own party in 2019 General Elections! Do you know why?