‘NDTV Frauds’, The book which exposed the dark side of NDTV and the real face of pseudo journalists in..

‘NDTV Frauds’, The book which..

It’s been 3 years now and still there is no justice delivered to Sunanda Pushkar who died mysteriously after she threatened to expose the dirty games of Shashi Tharoor. Until now there has been no progress in the investigation that could indicate clearly who was involved in plotting the murder of Sunanda.

When the Delhi police registered the case, the first person to give a statement that Sunanda Pushkar was suffering from lupus was none other than Shashi Tharoor. He even tried to mislead the people saying that she was suffering from mental depression and was on alprax tablets, later he came up with a theory where he said she was drinking lot of tender coconut which may have caused her death. But all these theories were only made up by Shashi Tharoor even before the post mortem report was out.

Initially the Delhi police tried projecting it as a suicide, but the post mortem reports revealed that her death was caused due to poisoning. There was lot of pressure put on Dr. Sudhir Gupta, the person who conducted post mortem of Sunanda Pushkar to conclude the case as a suicide. He had himself given statement in the press meet that he was being endlessly pressurized by the Congress minister Ghulam Nabi Azad to write the report as suicide.

So what made the Congress so desperate to make it look like a suicide, that they asked a central minister to threaten the doctor?

The issue was simple…..Sunanda Pushar was to reveal something massive about the IPL scam which would have brought the names of most powerful people of the Congress party.

The whole story starts from 2010…..if one remembers the IPL scam of the Kochi Tuskers, a Kerala franchise which was accused of money laundering in the name of ownership. Basically some politicians in Congress were the real owners of the Kochi Tuskers, but they never revealed their names. Sunanda Pushkar arranged money to buy the Kerala franchise on their behalf. Later Sunanda was paid 75 crores equity by a member of the consortium that won the Kochi IPL franchise.

Sunanda Pushkar arranged the money for some unnamed Congress people who were hiding behind her. But Sunanda had to give up her equity after Lalit Modi, the ex-IPL chief exposed that the ownership process of Kerala franchise was not transparent and a close associate of Sunanda was playing games behind.  Shashi Tharoor was then the MOS in home affairs.

After this incident, a bitter spat broke out between Lalit Modi and Shashi Tharoor and Lalit Modi directly accused Shashi of being one of the real owners of the Kerala franchise.  Rs 1530 crores was paid by a close associate of Sunanda Pushkar and therefore Sunanda was gifted stake worth 70 crores in the franchise. The entire scam got exposed within few months and Shashi Tharoor had to resign from his ministerial position.

But it was not just Shashi Tharoor who was involved in the Kochi franchise, but a very powerful man in the Gandhi family was also a part of this franchise. Dr Subramanian Swamy was the first to reveal this man’s name, who is none other than Robert Vadra. 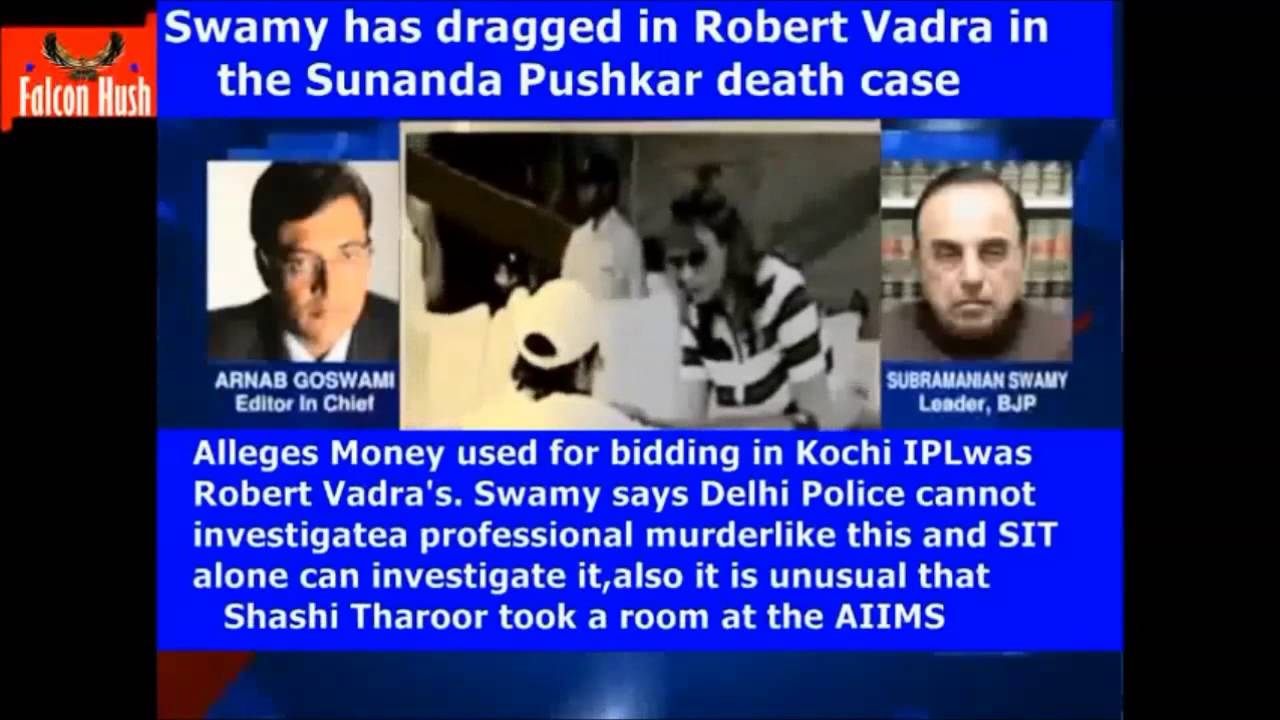 But their links not just stopped at Vadra’s house but extended upto ISI in Pakistan. It is said that huge amount was being transferred to few mafia players in Pakistan. The person who represented ISI was Mehr Tarar. This was also revealed by Sunanda Pushkar few days before her death.

Massive amount of money was being looted in the name of IPL, the winning teams were fixed before the match and the entire process was nothing but a illegal gambling!

Sunanda Pushkar was just made a bait in the dirty work by few Congress people to hide themselves from the media.

When Sunanda Pushkar got against this massive corruption, they tried to stop her from going to media. But she was not ready to back down as it affected her personal life. But Congress was not ready to face another jolt, since it was already in the soup of scams and it was the election year 2014. It was easy for some people to silence her than to face another scam which will bring out big name sin Congress.

So whoever wanted Sunanda to die, planned meticulously and took her to the Leela Hotel. According to reports, Sunanda Pushkar was very upset since the time she moved to Leela hotel and desperately wanted to meet the media. But she was always stopped by Shashi as revealed by the Republic TV.

So in a desperate attempt she had even messaged to many journalists including Barkha Dutt and Sagarika that she wanted to reveal something very important, but these two journos never spoke about it. Rahul Kanwal had also received her messages, but he hasn’t revealed the entire story till today. Unfortunately she was killed the same day she sent messages to journalists.

Even after her death, the Congress members tried to delay the investigation in all possible ways and threatened the doctors and police officers to close the case as suicide. The police initially gave a report that there was no poison found in her body. But when the viscera samples were sent to FBI, USA they found that traces of radioactive elements in her body.

Dr Swamy had revealed in 2014 itself that Dubai based professionals were hired to kill Sunanda who were well versed in using radioactive chemicals. The FBI also revealed that the police had sent a degraded viscera samples which is why they could not read the intensity to identify the exact element.

Now after the Republic TV broke the story and produced all the tapes, it was confirmed that Shashi Tharoor had completely mislead the investigation by his lies and he very well knew the death of Sunanda Pushkar.

The onus is now on the Police and the court to give justice to Sunanda Pushkar who was killed in cold blood for exposing the criminals in Congress. Mind Blowing Analysis that No Indian Should Miss!!! Did voters really punish Congress in 2014? The Hero who exposed 2G scam; Why Congress is so scared of Dr Swamy? What is happening with Akshay Kumar and Priyanka Chopra, why did Akshay Kumar say “Call Priyanka and ask if she has problem with me”?