Barkha Dutt, who acted blind like “Gandhari” all these years, has exposed her hypocrisy in the Tanvi Seth passport..

“A wealthy man who spends his time enjoying himself, especially one who behaves irresponsibly or is sexually promiscuous”. This is the meaning of playboy.

Now, let us know about ‘Playboy’ magazine. Playboy was a sexually explicit men’s lifestyle magazine that was founded in the year 1953 that was founded by Hugh Hefner. Several celebrities wait for their turn to pose naked in this magazine.

But you will be shocked to know that the first Indian who was featured in this magazine was our Prime Minister. Yes, it is other than first Prime Minister of India, Jawaharlal Nehru. 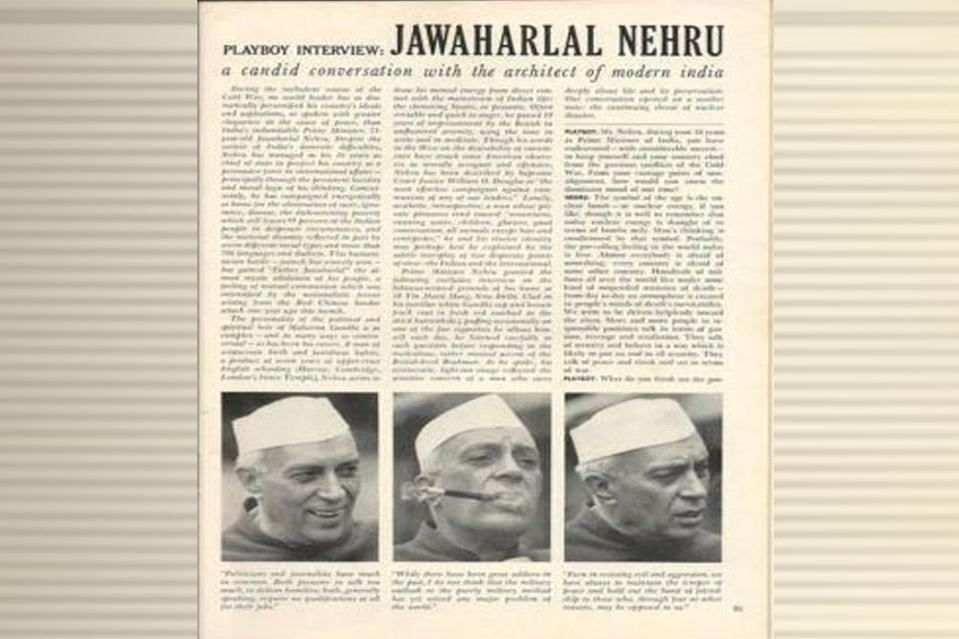 Read the article titled “The Curious Connection Between Playboy And Jawaharlal Nehru, India’s First Prime Minister” in the Forbes Magazine

Playboy founder Hugh Hefner died couple of weeks at the age of 91. While its pictures were undoubtedly the magazine’s primary attraction, the so-called “Playboy interview” remains its second-most popular feature. Inaugurated in 1962, the series quickly earned its journalistic chops for landing interviews with some of the world’s most prominent figures, including Malcom X, Fidel Castro, The Beatles, Martin Luther King Jr., Jimmy Hoffa, George Wallace, Henry Miller and Cassisus Clay. This was just in the first three years. The magazine would go on to interview President Jimmy Carter, among many others.

But many will be surprised to learn that the first head-of-state to appear in Playboy’s controversial pages was not Castro or Carter, but Jawaharlal Nehru, India’s first prime minister and most prominent founding father alongside Mahatma Gandhi.

In its October 1963 issue, Playboy ran an extensive interview with Nehru titled, “a candid conversation with the architect of modern India.” In it, Nehru expounded exhaustively on a wide range of topics, including his views on nuclear weapons, the weaknesses inherent in democracies, Cold War politics and international relations, the corrosive impact of materialism on society, world religion, the country’s explosive population growth and his vision for India’s future in a rapidly evolving world.

The interview was both substantive and revealing, but not without controversy. The same issue of the magazine carried an “editor’s note” on Page 3, which stated, “after the rest of the magazine had gone to press, we received word from the Indian Embassy in Washington that our interview with PM Nehru was not, in fact, the result of an exclusive, personal conversation with the head of the Indian state, but simply a gathering together of public pronouncements made by the Prime Minister in various speeches, statements, etc., over the past several years.”

In other words, the Indian Embassy was claiming that Prime Minister Nehru’s interview with Playboy never occurred. Rather, the journalist who allegedly conducted it had merely collated earlier speeches from the Indian premier and presented it as an exclusive, original interview for the controversial men’s magazine.

The same editor’s note, however, disputed the Indian Embassy’s assertion, noting, “the Nehru material was submitted to us by a well-regarded journalist-publisher who has previously conducted numerous similar interviews with famous personages all over the world; it was sold as an actual interview, recorded on tape, and the covering letters that so described the material also included photographs of the Prime Minister and journalist together. There was no reason to doubt its validity and we consequently published it in good faith as a personal interview.”

But in a sign of just how precarious Playboy’s editors believed the nascent magazine’s position to be, the editorial note concluded, “an official refutation from the Indian Government must be respected, and since our attempts to reach the supposed interviewer for further clarification have proved unsuccessful, editorial integrity requires that we print this statement.”

Despite the uncertainty surrounding the entire affair, Nehru’s purported Playboy interview created unprecedented buzz and excitement in India. The country’s puritanical censors had already banned the men’s magazine in India by then, but the October 1963 issue of Playboy quickly became one of the most sought-after contraband items in the country.

With Nehru’s name gracing the cover, copies of the magazine were smuggled into India, fetching prices 30 times greater than their original value. As one newspaper editor observed, copies of the October issue were “valued higher than a bottle of Chivas Regal.”

Nehru was not the last member of India’s famed Nehru-Gandhi dynasty with a connection to an American adult magazine: Penthouse published an interview with Nehru’s grandson—Prime Minister Rajiv Gandhi— in its January 9, 1987 issue. Following his grandfather’s playbook, Gandhi alleged that he had sat for the interview with the journalist unaware it was ultimately intended for Penthouse. Predictably, that interview also generated considerable controversy throughout India.

More than 50 years later, no definitive investigation has ever been undertaken to determine whether the interview was actually ever conducted. The preponderance of evidence appears to indicate, however, that the Embassy’s version of events was indeed accurate given that the magazine could not reach the journalist again. The magazine also opted not to publish the photos allegedly in its possession of the journalist and Nehru together.

Congress has got this tweet deleted. Can you all share it as much as you can. ☺️ #KnowYourLegacy pic.twitter.com/YTxRsrLISV