WATCH!!! After what Rahul Gandhi..

Since almost 2-3 months there is a bitter war going between TDP (Telugu Desam Party) and the BJP. The fight suddenly started just when the general elections and Andhra Elections are due next year. Obviously one would understand that the whole drama of TDP to leave BJP before the Assembly elections are to gain the sympathy of the people and to win elections.

The special status for Andhra is more of an excuse for TDP to break away from BJP and wait to see the chances of BJP winning in the 2019 elections and then decide their support. But there is also other reason why TDP is upset with BJP. As we very well know the TDP has many fund raisers and super rich businessman who fund the party for elections and many other work. Most of the time its these people who decide the party’s future. One such man who has mostly been the major fund raiser for TDP is Galla Jayadev. Not many people would have heard his name, but he is the owner of the Amaron Batteries which are quite famous in India.

This man is regarded as the treasure house for TDP. He has business all over India and has been the major supplier of batteries to the government of India as well. This man had an easy pass until Congress government was in power as none of the contracts and purchases were transparent and whoever gave best deal to ministers would get the contract. The Coal scam was a typical example of how the Congress used to give government contracts. But after Modi government came to power, most of the contracts were given based on auctions which are completely transparent.

All the government auctions can be witnessed in the respective offices of the government and no one can cheat the people. But this process was not well received by most of the MPs and allies of BJP who themselves are involved in fraudulent deals. Similarly, this man Galla Jayadev lost the bid to supply Amaron Batteries to Government. This bid was won by Exide Batteries which will now be supplying batteries to government.

Irked by the development, this man Galla Jayadev along with TDP tied hands with Congress to defeat BJP in Karnataka. According to sources, the secret deal was done months back even before TDP officially broke up with BJP.

The inside report now reveals that Galla Jayadev has sent Rs 1000 crore cash to Karnataka Congress in a container vehicle. This money is said to be delivered in a place called Chittoor District of Andhra. The move of Galla Jayadev to support Congress is definitely not a surprise as his mother herself is a Congress member and has been working for Congress since years.

The fraud business of Galla Jayadev is not new and he has been accused in corruption cases since years. In 2014, the CBI had filed FIR against Galla Jayadev and Galla Aruna Kumari and her family members in the Emaar scam. The key allegation against the Galla family is that they encroached on 2.2 acres of prime government land in Nanakramguda that was handed over to the APIIC for the Emaar township project. Counsel of the complainant A. Chetan said, “The court issued orders to issue FIR and conduct probe into the complaint filed by my client regarding the Galla family’s involvement in the Emaar scam.” The court ordered that an FIR is booked against certain members of the Galla family and IAS officials V. Seshadri, the then Ranga Reddy collector, and C.V.S.K. Sharma, the former GHMC commissioner, based on the private complaint lodged by one Purushottam Naidu.

So, one can imagine how much the system is corrupt and how hard it is for a single man like Modi to rein in everyone. Even after gaining enormous benefit from Centre, if TDP is unhappy over the funds received then it is quite clear the relationship in political parties are not really based on states interest but more so their personal interest and convenience. 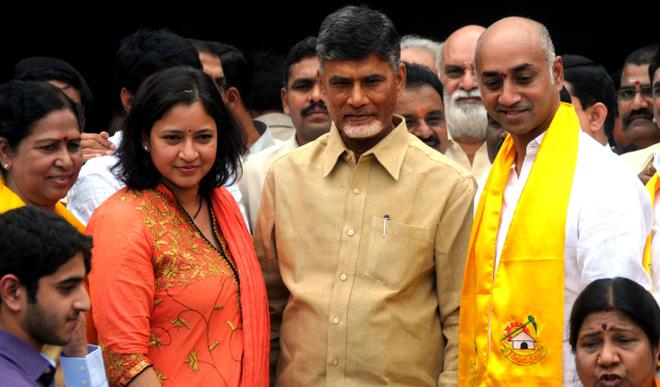 Disclaimer: The information was got through insiders of the Congress and TDP and Postcard has only presented them to people and do not claim responsibility. Shashi Tharoor scores a massive self goal in a bid to impress Sonia Gandhi and team!!! Here’s what happened after he attacked PM Modi After Facebook CEO’s statement that nailed Congress, Rahul Gandhi and Congress social media head Ramya stoop to the lowest! Do you know what the duo said about PM Modi and Mark? After the victory in Doklam Standoff, PM Modi has formulated another master plan that will break China’s spine