NDTV journalist scores a massive self goal in a hurry to attack PM Modi! Here’s what she said to..

26th February is the death anniversary of Veer Savarkar, one of the bravest revolutionary freedom fighters of India. Vinayak Damodar Savarkar was born on 28 May 1883 in Maharashtra. Savarkar since his childhood was attracted towards freedom movement and while he was studying in school, he developed the habit of participating in freedom fights. Fearlessness, bravery was the hallmark of this young boy who had a determination to get India out from the hands of the British.

It was the time when British used the tactics of divide and rule. They propped up Hindus against Muslims and spread communal hatred in places where the freedom movement gained momentum. When Savarkar was only 12 years old, he witnessed communal clash for first time in his village. A gang of Muslims attacked his village, burning down houses and forcing people to convert to Islam. Veer Savarkar at a young age had resisted this Muslim domination in his town and although his boys were outnumbered, he inspired his friends to join him and chase away the Muslim mob which had attacked his village. The boys fought until last man in the mob was sent out of the village.

This incident disturbed Veer Savarkar very much. He understood that different community members were pitched against each other by the British in order break India and they had succeeded in their ploy to divide India on religion and caste. He realised that Indians were losing National identity and there was a need for a Nationalist movement to galvanize the people of India. At just 15 years, he started a youth organisation called Mitra Mela (Band of Friends) to advocate nationalist ideas. Same time he lost his parents and his elder brother Ganesh took the responsibility of the family.

In 1902, he joined the Fergusson College in Pune for BA, where he started giving speeches on Nationalism, patriotism and revolutionary movements. He was inspired by Lokamanya Balgangadarnath Tilak’s call to boycott all foreign clothes and organized a bonfire during Dusshera festival to burn all foreign clothes. At a small age of 18 years, he started writing poems, books on Nationalism and Hinduism. He was fondly called VEER by his friends for his unbending attitude.

After he completed his degree, nationalist activist Shyamji Krishna Varma helped Vinayak to go to England to study law, on a scholarship. It was then, Tilak started an organisation called Garam Dal, literally “Army of the angry.” as a result of a split between the Indian National Congress and Tilak. Tilak was upset with Congress ideology to hold talks with British and convince them to leave India. He felt that many leaders in the Congress were happy under the British rule and were developing the radical mindset which was against the core ethics of the Nation. Tilak was immediately jailed for opposing the INC and British.

Savarkar in England started Free India Society to motivate students in freedom struggle and declared to fight for independence through revolutionary ideas. He said  “We must stop complaining about this British officer or that officer, this law or that law. There would be no end to that. Our movement must not be limited to being against any particular law, but it must be for acquiring the authority to make laws itself. In other words, we want absolute independence.”

Savarkar who was an avid reader, read many books on war techniques and applied them in freedom movement. He believed that the right strategy was the keen to tackle British and wrote a book emphasizing guerrilla warfare called The History of the War of Indian Independence. It was via this book that Savarkar became one of the first writers to allude the uprising as India’s “First War for Independence”. The book gained so much popularity in a short span, that the British banned the book throughout India.

In India, Ganesh Savarkar organised an armed revolt against the Morley-Minto reforms of 1909 after which he was arrested and sent to cellular jail in Andaman islands. The British also named Savarkar in the case for plotting the crime and was issued a look out notice for Savarkar. Finally, in 1910 he was arrested in Paris and shipped to India. Savarkar escaped from the ship and swam for over 2 Km in sea to reach the shore hoping that his friend to would be there to help him. But the late arrival of his friend helped the British recapture him and he was taken to jail.

Arriving in Bombay, Savarkar was taken to the Yervada Central Jail in Pune. Following a trial, Savarkar, aged 28, was convicted and sentenced to 50-years imprisonment and transported on 4 July 1911 to the infamous Cellular Jail in the Andaman and Nicobar Islands.

Savarkar in cellular Jail was treated with utmost disrespect, humiliated and insulted by British jailer. Savarkar was given a corner cell where he had no access to any outer world. He was made to work for 18 hours a day, given minimum food and minimum clothes. He was made to work for hours without break in oil mill under regimental strictness, he wasn’t allowed to talk to anyone including his brother who was in the same jail. He was tortured on a daily basis by the British officers beating him, abusing him and poking him with hot iron sticks. But Savarkar never broke down even once. He was made to see the hanging of his fellow inmates and freedom fighters to make him mentally weak. He was made to witness the torture of his friends where their head was smacked with iron rods and sticks. 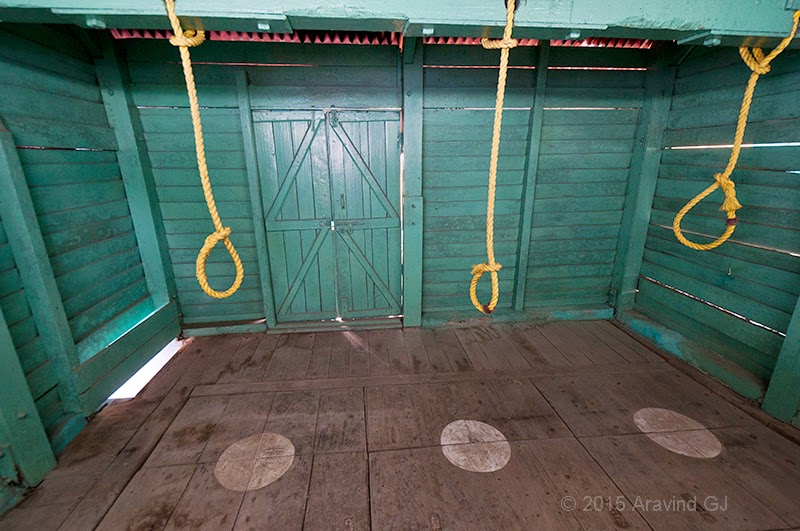 It was then Savarakar decided to write his views and ideas of Nationalism and Hinduism. He was denied giving access to pen and paper after which he plucked his own nails, collected thorns and pebbles to write on the walls of the cell. He spent 13 years in cellular jail writing endless scripts on Nationalism. His famous description of who is Hindu, who is a Nationalist was written on the walls of the cells.

He described a Hindu as….as a patriotic inhabitant of Bharatavarsha , venturing beyond a religious identity. He described Hinduism, Jainism, Sikhism and Buddhism as one and the same. He outlined his vision of a “Hindu Rashtra” (Hindu Nation) as “Akhand Bharat” (United India), purportedly stretching across the entire Indian subcontinent. He defined Hindus as being neither Aryan nor Dravidian but as “People who live as children of a common motherland, adoring a common holyland.”

Finally in 1923, due to extreme pressure from Tilak and other prominent leaders, Savarkar was released under strict conditions of not participating in politics for 5 years and barring to leave Ratnagiri district. Savarkar who was barred from participating in politics, focused on abolishing untouchability in the district. He fought for caste unity and achieved 100 % success in a span of just 2 years. Dr B R Ambedkar who was the editor of the ‘Janta’, a monthly, was impressed by Savarkar’s work so much that he compared his work to Lord Buddha.

He continued his work on Nationalism and opposed the Gandhian principles of Ahimsa saying that Indians were not cowards and we cannot beg foreigners for Independence. He strongly pitched for a uniform civil code and strongly opposed the division of India based on religion.

Based on Dr B R Ambedkar’s writing….Mr. Savarkar insists that, although there are two nations in India, India shall not be divided into two parts, one for Muslims and the other for the Hindus; that the two nations shall dwell in one country and shall live under the mantle of one single constitution;…. In the struggle for political power between the two nations the rule of the game which Mr. Savarkar prescribes is to be one man one vote, be the man Hindu or Muslim. In his scheme a Muslim is to have no advantage which a Hindu does not have. Minority is to be no justification for privilege and majority is to be no ground for penalty. The State will guarantee the Muslims any defined measure of political power in the form of Muslim religion and Muslim culture. But the State will not guarantee secured seats in the Legislature or in the Administration and, if such guarantee is insisted upon by the Muslims, such guaranteed quota is not to exceed their proportion to the general population.

He wrote more than 8 books in his lifetime and over 10,000 pages in Marathi language. His literary works in Marathi include “Kamala“, “Mazi Janmathep” (My Life Sentence), and most famously 1857 – The First War of Independence, in which Savarkar popularised the term “First War of Independence.” Kale Pani (Black Water which means “life sentence” on the island prison on the Andaman islands), which reflected the treatment of Indian Independence activists by the British. He wrote an inspirational historical work, Saha Soneri Pane (Six Golden Pages), recounting some of the “Golden periods” of Indian history.  He wrote the atrocities of British and Muslims on Hindu residents in Kerala in the book, Mopalyanche Band (Muslims’ Strike) and also Gandhi Gondhal (Gandhi’s Confusion), a political critique of Gandhi’s politics.

His poems include, Sagara pran talmalala (O Great Sea, My Heart Aches for the Motherland), and Jayostute (written in praise of freedom).

He spent his life fighting for the country but was accused by Congress of inciting violence and hatred. But B R Ambedkar believed that Savarkar way of life and his fight to unite all caste and religion was something which was recognized by very few. Savarak became the victim of political games of Congress which found him as an easy target. But even today his ideas about Nationalism, love for country and the struggle he faced can never be denied and he became a role model to many revolutionists in the country.