Will power of PM Modi achieves the Impossible! Now River Ganga is cleaner than ever due to Namami Gange..

Will power of PM Modi..

When Modi government came to power in 2014, one of the first reforms he took was the Neem coating of urea. The reason he took this particular reform was because the subsidiary urea which was given to farmers through government was being illegally supplied to chemical industries. This illegal trade took a major hit when Narendra Modi government directed the governments to neem coat the urea. As a result the urea became useless for the chemical industries and the entire urea reached the farmers.

The illegal supply of Urea to industries got completely stopped. Under the able leadership of Narendra Modi and former Chemical and fertilizer Minister Late Ananth Kumar the urea became easily available to farmers and agriculturist only. The fertility of the soil also improved due to the neem coat which gave an added benefit to the farmers.

But just after the Congress won the elections last week and took over the state, the urea crisis has reemerged within no time. The crisis which was not seen in nearly 4.5 years is back within a week after Congress government came to power.

Farmers in Raisen and Guna districts in Madhya Pradesh staged protests and blocked roads after the cooperative societies ran out of the urea on Thursday. The farmers alleged that black-marketing was rampant by private traders. There were reports of protests from Dewas and Neemuch on Friday also. Meanwhile, in Rajasthan’s Hadoti region, long queues were seen outside cooperative committee offices for urea. Commissioner, agriculture production, Madhya Pradesh, additional chief secretary, PC Meena, says 18 of the 51 districts in the state is facing a shortage.

We are getting additional railway racks for urea and the crisis will end within three to four days. Also, there are some logistical problems leading to the crisis. There is no black marketing going on, I haven’t received any complaints,” says Meena.

However, farm group leaders allege that the shortfall is due to rampant sale of urea in the black market. 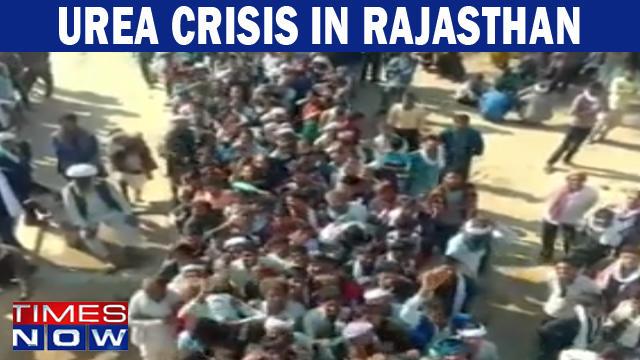 “A 45 kg bag of urea cost ~250 and farmer gets it in credit when they purchase it from the cooperative society, but private traders are selling it at ~450 per bag and there is nobody to check it. Traders have been given a free hand because they contributed funds during elections,” alleges Bharatiya Kisan Union state general secretary Anil Yadav.

“Earlier 20% of urea was given to traders, now it is 50%. Farmers prefer to buy it from society as they get credit, and hence the long queues,” says Dixit. According to figures of the agriculture department, Madhya Pradesh needs 13 lakh tonne of urea for the ongoing rabi season and so far the state has received 8 lakh tonne, of which 1.5 lakh tonne is still in godowns. The urea quota of Madhya Pradesh is 3.70 lakh tonne every month.

Before the state elections in November, the central government gave 4.10 lakh tonne, with the promise that the state would be given the same quantity during December and January.  “We need an additional 80,000 to 90,000 tonne of urea in December and we have been promised that five railway racks of urea (each rack carries 3,000 tonne of urea) will be provided to MP. It should be sufficient to tide over the crisis,” says Meena.

But the Kamal Nath-led Congress government in Madhya Pradesh is not taking any chances. The chief minister talked to railway minister Piyush Goyal and Union chemicals and fertiliser minister Sadananda Gowda and urged them to provide additional railway racks and urea and also directed officials to monitor the situation.

Meanwhile, the situation in Rajasthan is also grim. “I have been standing in the queue outside shops for the last couple of days to get 30 bags of urea, but I have not got a single bag,” said Raju Nagar, 45, a farmer from Gadepan village in Kota district. Each bag contains 45 kg urea.

Bharat Singh, Congress MLA from Sangod, Kota, blamed the Centre for the urea shortage. “The Centre failed to allocate sufficient urea to the states and now farmers in Rajasthan are bearing the brunt,” he said.

However, officials deny of any urea shortage. Divisional commissioner, Kota, KC Verma said the railway racks with 3,198 metric tonnes of urea arrived on Friday and distributed to cooperative societies. He added that the Kota division has so far received 1.61 lakh metric tonnes from its annual quota of 2.38 lakh lakh metric tonnes. Reports Hindustan Times

Just as the Congress came to power, once again, the Urea is being sold in black market and there is severe shortage of urea for the farmers which has caused crisis in Rajashthan and Madhya Pradesh.

Urea crisis continues in Rajasthan: Stampede occurred in Bundi district where farmers were lining up since morning and 3 farmers were injured. CM Ashok Gehlot has instructed the official to ensure urea supply in the state but the crisis for farmers continue pic.twitter.com/FGbkUaJcmR