In a bold move by the Yogi Govt, 7 illegal Islamic shrines were demolished near holy Govardhan Parvat in..

The Wire news portal which is more inclined towards left ideology and engulfed in colonial mindset probably has never understood the India culture or the rich traditions of our country.

The news portal which is well known for its misleading stories has made disgraceful comments on one of the proud daughter of India Hima Das. Hima Das who is known as the Golden girl for bringing Gold to India in running race was mocked, trolled and taunted by so called liberals and seculars just because of having different views.

The Wire has now questioned the traditional attire Gamusa of the Assam calling it a symbol of insecurity. Hima Das is usually found to be wearing the Gamusa every time she wins a medal for India. While she holds Indian Flag she wraps the Assamese Gamusa around her neck with pride.

But the great people in Wire feels that she is trying hard to project herself as an Assamese and calls it insecurity. The Wire in its article goes to say…. There is nothing to hold against the use of the gamusa, and no reason for anyone to shy away from it. But at a time when the state and its residents are preoccupied with identity and the threat of having the wrong one, are we, the Assamese community, trying a little too hard to reinforce our identity?

Sports would have been a natural place to make that visible. What is worrying is that the practice of flaunting a gamusa is now a defence mechanism. Especially with the debate over the National Registrar of Citizens (NRC), residents feel the need to advertise profusely who the true Axomiya or Assamese are, and what constitutes their identifiers.

The state today is in a race to protect and cement the identity of the Assamese. This effort has subconsciously trickled down to mass media and into the sporting arena. The debate around the NRC has further fuelled widespread insecurity. Recent violence against Bengali-speaking residents, who are equally Assamese, hinted at it once again.

So, when we see scattering of gamusas at a cricket stadium, or even on a television show like Kaun Banega Crorepati, it triggers a pang of concern. Are we trying too hard to prove who we are? And in the process, are we unwittingly suppressing the identities some our own?

Hima represented India when she won the gold at the under-20 Asian Games. She would have been the pride of Assam, even if she hadn’t borne the gamusa. There were a few who took more pride in her carrying the gamusa than in her athletic achievement on a global stage. 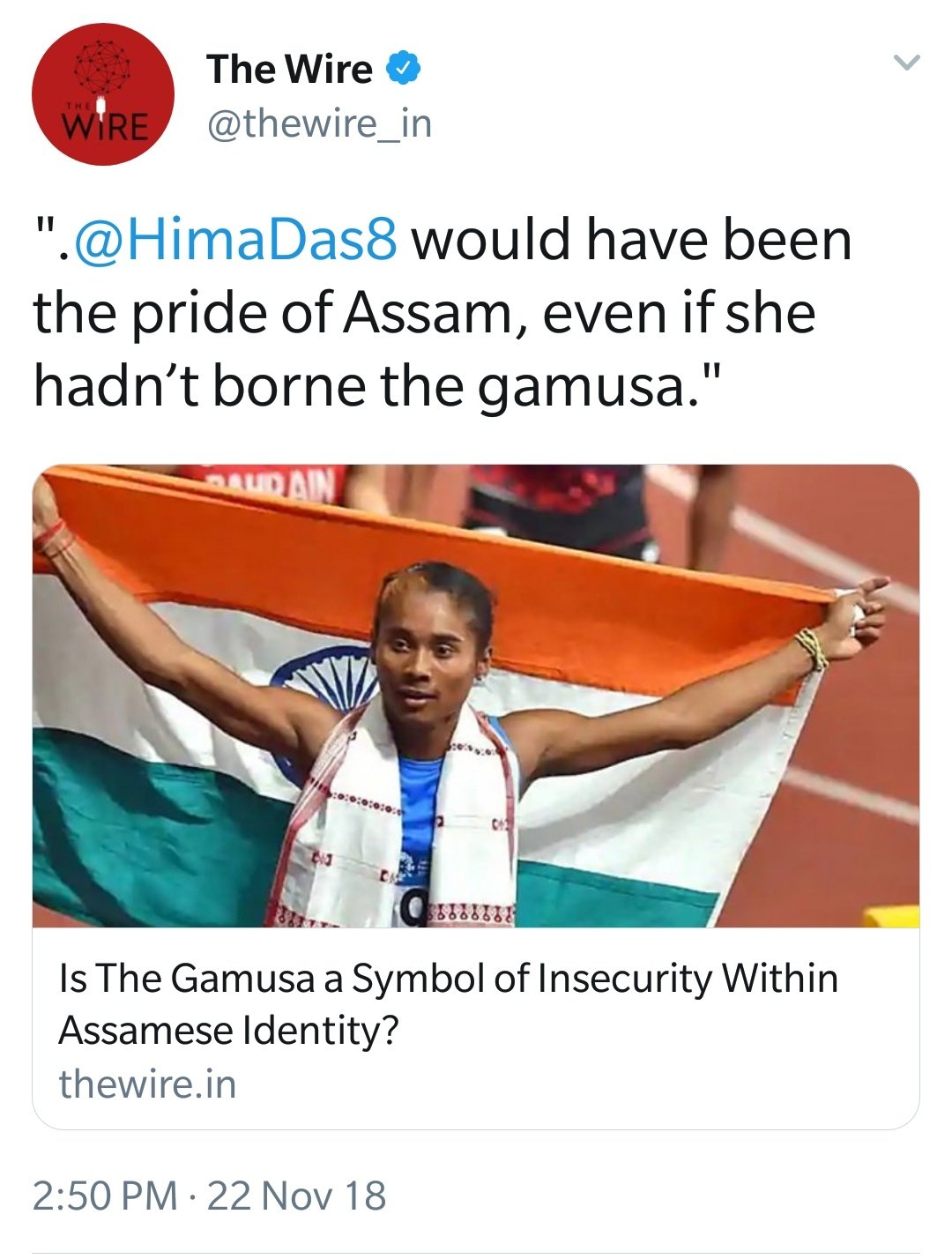 The Wire gives a ridiculous comparison saying the Assamese now try hard to project themselves after the tragic incident  where two Assamese were beaten to death over fake news that said they were Child Kidnappers.

Wearing the Gamusa has been a tradition of the Assamese for many decades and they display it proudly. In fact many states have their own way of representing themselves which they follow on National and international level as a matter of pride.So, what is wrong in projecting their state pride by wearing their traditional attire?

Seems like it is an attempt by Wire to divide the community and even states just by creating unwanted collisions which they enjoy the most. Probably their friends who sparked Bhima Koregaon violence got immense support from Wire, because they were in the verge of dividing the society in the name of caste for which they are all working.

While the entire country is appreciating and the world is looking at Hima Das as a hope in India’s running events, this is how the so called News Portal maligns her with senseless talks and articles.

In a bold move by the Yogi Govt, 7 illegal Islamic shrines were demolished near holy Govardhan Parvat in Mathura After an enjoyable short holiday, BSP chief Mayawati back to homeland !!! Watch out how she backfired at Akhilesh Yadav!!!