India has a country is very fortunate to have got leaders in the past who completely neglected the country for their greed. While many countries like Singapore, Malaysia got independence 10 years later than India, they progressed much faster than India and today Singapore is one of the most advanced nations of the world in terms of technology, economy and growth.

The only difference between those countries and our country is that India did not get a dedicated patriotic leader after Independence who had the will and commitment to work for the country. Rather we got such leader who was more worried about securing his life and his family in the Indian politics and worried about appeasing certain sections to gain votes.

Of course, some of the blunders committed by Jawaharlal Nehru have grown like cancer for which India is paying price even today. The biggest mistakes that set India on wrong path can never be forgotten!

Since then, Pakistan was eyeing Kashmir and occupy it. There were many princely states in India which were not part of India and Sardar Patel was given the responsibility of uniting all these states into India. Patel who was a master strategist convinced every ruler of 565 Princely states and got them united with India. The only responsibility Nehru took was the Kashmir and the result is today in front of the country.

When Nehru could not solve Kashmir’s problem, all he had to do was take the advice of Patel, but Nehru without consulting anyone took the problem to United Nations and thereby destroyed the peace of the region forever. Then Sardar Patel had warned Nehru saying “You’re one decision will make the country suffer for years.”

It reminds of an instance which shows how serious Nehru was about Kashmir, Gen Manekshaw and VP Menon had flown to Srinagar to sign the instrument of Accession…Manenshaw recounts the event what happened in the Cabinet Defence Committee:

“At the morning meeting he handed over the (Accession) thing. Mountbatten turned around and said, ‘come on Manekji (He called me Manekji instead of Manekshaw), what is the military situation?’ I gave him the military situation, and told him that unless we flew in troops immediately, we would have lost Srinagar, because going by road would take days, and once the tribesmen got to the airport and Srinagar, we couldn’t fly troops in. Everything was ready at the airport.

As usual Nehru talked about the United Nations, Russia, Africa, God almighty, everybody, until Sardar Patel lost his temper. He said, ‘Jawaharlal, do you want Kashmir, or do you want to give it away’. He (Nehru) said,’ Of course, I want Kashmir (emphasis in original). Then he (Patel) said ‘Please give your orders’. And before he could say anything Sardar Patel turned to me and said, ‘You have got your orders’.

I walked out, and we started flying in troops at about 11 o’clock or 12 o’clock. I think it was the Sikh regiment under Ranjit Rai that was the first lot to be flown in. And then we continued flying troops in. That is all I know about what happened. Then all the fighting took place. I became a brigadier, and became director of military operations and also if you will see the first signal to be signed ordering the cease-fire on 1 January (1949) had been signed by Colonel Manekshaw on behalf of C-in-C India, General Sir Roy Bucher. That must be lying in the Military Operations Directorate.”

After India and Pakistan parted their ways, the Jammu Kashmir region was divided into Jammu area, Kashmir, Ladakh, Skardu, Gilgit Wazarat and Gilgit agency (today’s Gilgit -Baltistan). Gilgit Agency was given on lease for 60 years to the British since 1935. After India got independence in 1947, Lord Mountbatten let go the lease of the Gilgit Agency which was later occupied by the Maharaja.

But Pakistan had one advantage, all routes that lead to the Gilgit-Baltistan were through Pakistan, there were no roads or railway routes that connected India with Jammu Kashmir. Even the flights had to first go to Peshawar from Srinagar before refuelling to reach the Indus Valley. Indian troops had then occupied all the other region of Poonch a Kargil. Given the importance of the area, the Indian army was ready to occupy the Gilgit-Baltistan area after Kargil. But the army got no orders from the Prime Minister and the commander in the Kashmir was totally incapable.

Major William Alexander Brown who was the commander of the Gilgit scouts, got an opportunity to march ahead with his troops and for the first time on 1st November, 1947 Pakistan flag was hoisted in the region. Once the region was occupied by Pakistanis, people started torturing Indians and numerous women and children were kidnapped and kept as sex workers. But Nehru never took the issue seriously and completely forgot the issue of Gilgit-baltistan.

But this was not it, there was another big blunder created by Nehru. Nepal was considered a very close ally of India since decades. We shared common interest, common culture which was enough to unite the two countries.

After Indian Independence, the Prime Minister of Nepal Matrika Prasad Koirala wanted to merge Nepal with India. But Nehru who was influenced by colonial mindset rulers, opposed this move. He said that it will spoil the image of “Peaceful” Nation in the world and went to appease the communists of China. The then Indian Army chief had advised Nehru to consider the offer as it will give India a natural protection from China and prevent China’s influence of Nepal.

But Nehru declined the offer without consulting anyone. Nehru got a second opportunity in the year 1951 when Nepal king Tribuwan fled to India and announced support to our country. Nepal was under severe threat from China and communists and the Ranas wanted to dethrone the Nepal Kings. China in the year 1950 made an invasion on Tibet. The Indian army had advised Nehru to help Tibet and prevent the Chinese army from conquering the country as it would pose an extreme threat to India. But this man handled the issue in most haphazard fashion by letting China occupy Tibet. As a result, India lost its official boundary and opened itself for a constant threat. Tibetans requested for India’s help, but got none except refugee house!

Losing the war with China was one of the most humiliating thing that ever happened to India and Indian army.

In 1962, after India lost the war to China, the entire world believed that the Chinese army was so strong and well equipped that India could not withstand the attack. But in real, the story was entirely different. The declassified military documents in Henderson Brooks report blames Jawaharlal Nehru’s ‘Forward Policy’ and an ill-prepared army for the debacle.

The information suggests that most of the reports relating to 1962 war debacle was prepared in 1963 but was kept secret all these years by the successive governments claiming that it had sensitive information and operational details which would cause threat to the country.

The declassified documents reports that the Chinese control over the Indian territory had started well before 1962 and probably 5 years before, but the then government did not take the issue seriously. The sensitive documents reveal that the Chinese had strengthened their position in the region of Tibet and Indian border long back before the situation in the border turned hostile for India. 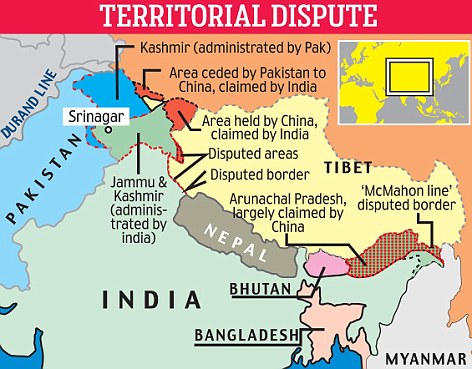 Gen Brooks writes that the Nehru government realised the threat only when it reached the peak and took hasty decision without prior preparations. He says Nehru’s ‘Forward Policy’ was the main reason which lead to a major debacle in 1962. Nehru took aggressive step of preventing Chinese domination in the areas of Ladakh and the erstwhile North East Frontier Agency (NEFA) by deploying heavy troops and patrolling teams in the border posts which lead to the increase in the conflict between the Chinese and the Indian government and the plan to go for war was executed by the military headquarters without necessary backing and deploying more troops.

On November 2, 1961, Nehru held a meeting on the Forward Policy which was attended by Defence Minister Krishna Menon, foreign secretary M.J. Desai, Army Chief General P.N. Thapar and Intelligence Bureau director B.N. Mullick. The military and the government put forth a complete contrary reports to tackle the Chinese at the border. “The government who politically must have been keen to recover territory, advocated a cautious policy; whilst Army Headquarters dictated a policy that was clearly militarily unsound” said Brooks.

While the Chinese army had spent a considerable amount of time preparing the attack, Nehru’s political aggression made the Indian army position their troops without preparations. Lieutenant General Brij Mohan Kaul who was handpicked by Nehru for the military operation rushed 7 Infantry Brigade into Doha area. He even refused to redeploy the troops, although he had the time and committed a huge blunder.

IB chief Mullick was another Nehru’s confidant who gave a very stupid advise to Nehru saying that China will never react using Armed forces for India’s Forward Policy. Brooks suggests that the entire debacle was caused due to political and military blunder which the leaders never forethought and embarrassed the country big way. This entire story was revealed by Neville Maxwell in his blog and stated that the documents has been kept in Defence Ministry for years without revealing the actual truth to the world.

These blunders committed by Nehru are something which ruined Indian foreign policy forever and opened up all fronts for terror attacks from Pakistan, military attack from China for which the innocent people of the country are suffering and thousands of our soldiers are dying each day!