Congress joins hands with the..

The daring rescue of 46 nurses from the clutches of the ISIS terrorists happened 3 years back when Narendra Modi government took over. Lot of discussions and debates were done on the rescue operation in which the Indian government was very much appreciated for the way they handled the crisis.

This issue is again back in the media after Salman Khan movie Tiger Zinda Hai was released, the movie is based on a similar plot in which the Indian government rescues nurses trapped in Iraq. But the movie gives a complete different angle claiming that the RAW agency of India used the help of Pakistan ISI to rescue Indians. This is actually a shock to those who really know who exactly is sponsoring terrorism in Kashmir, who is funding anti National activities in India and who was behind the 26/11 Mumbai attack. Yes, it was none other than the Pakistan Intelligence ISI.

So it makes one wonder how could these film makers claim that India took the help of ISI to rescue Indians?!

Lets rewind the history and take a look how exactly the nurses trapped in Iraq were rescued.

46 nurses from India were working in a hospital in Tikrit, Iraq, these nurses were mostly from Kerala. It was sometime in June-July 2014 the ISIS terrorists attacked the hospital and bombed the entire area bringing it to a stand still. The ISIS terrorists shot many Iraqi patients in the hospital which lead to a tense situation and the Indian nurses were told to vacate the hospital immediately. But the nurses had no idea where to go since their accommodation was provided in the hospital itself. These nurses had reached Iraq just a few months back who were hired by a Delhi-based agency, which charged them Rs 1.5 lakh each and promised a monthly salary of $750. Since the time they joined hospital, they were confined to the building and were not allowed to go out anywhere due to ISIS attacks. 6 people were accommodated in one room and the hospital was the world to them.

But when the ISIS attacked the city of Tikrit, the nurses had no other option but to stay in the hospital and hide themselves. These nurses who had the contact of the Indian Embassy in Iraq informed about the situation to Ajay Kumar, the Indian ambassador who immediately informed the Ministry of External Affairs and promised to provide all support. The ministry informed them to remain in the hospital and not to go out anywhere as the roads in Tikrit were blocked by ISIS. The central government with the help of Department of Non-Resident Keralites’ Affairs collected the passport details of all the nurses and prepared for negotiations.

On request of Indian government, the Iraqi officials and the healthy ministry supplied food to the hospital and made sure a team was deployed near the hospital for all help of Indians. Here was the turning point, not many know that Indian government sort the help of Iraq Red Crescent and some authorities from Saudi Arabia for negotiations which are said to have taken place at the highest level. It is said that the Saudi officials played a very crucial role in negotiating the release of Indian nurses with the ISIS. The negotiations is told to have taken place for almost 7-10 days, after which the ISIS agreed to free Indians. But even then, there was no guarantee that ISIS would surely release Indians.

By then, the militants had attacked the hospital twice and destroyed the hospital. Since the Indian embassy had instructed the nurses not to leave hospital, they stayed put in the broken building. It was on July 3, the militants came again and asked all the nurses to vacate the hospital within 5 minutes. The Indian government who had doubts about ISIS was even ready for a commando operation if things go out of control. But suddenly one of the ISIS terrorists informed all the nurses that they were going to be shifted to Mosul. While the nurses were in the buses, their phones rang and they were callers from Delhi. The officials asked them to secretly peep out of the window and text the names on the signboards along the route. Before they reached Mosul, they were made to halt in many places and finally on July 5 they reached Mosul. Finally at around 8.45 PM, the militants took all the Indians to an isolated location where there were Indian Officials waiting for them. The nurses were delighted to see the Indians and ran to the bus and they were immediately rushed to Erbil international airport and brought to India. 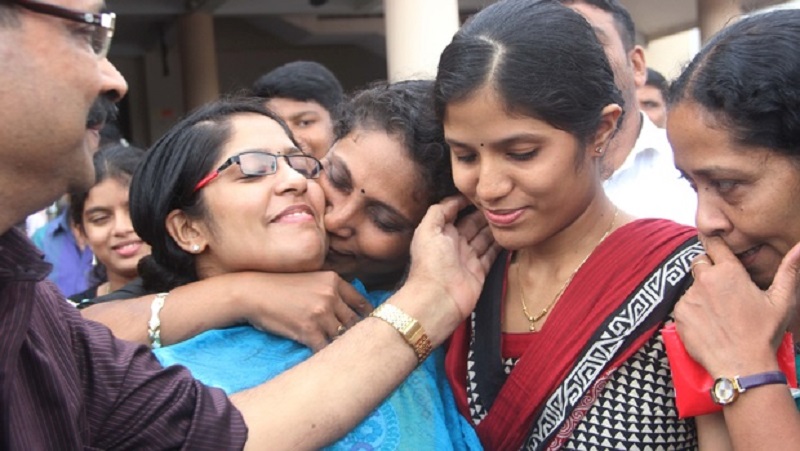 It is said that Indian Embassy was in direct touch with the terrorists and tracked their movements every moment until the nurses were rescued. C D Sahay, the former RAW agent who handled the IC814 Khandar Hijack crisis says that the Indian government handled the situation brilliantly. He said that government was very patient and the entire negotiations process was completely fool proof. “They never once let out the details of the negotiations; all they said was that the nurses were safe. There were no irresponsible statements, and once the negotiations went through, they were ready to bring the nurse back. B B Tyagi, India’s ambassador in Iraq, is a man of great repute. He has the right contacts and skills to oversee such an operation. He shared information with the government, and the government never allowed any sort of frenzy,” said Sahay.

So, from this we understand that it was the Saudi and Iraq red Cresent who extended help to India and not Pakistan ISI who are in tandem with ISIS terrorists.

But the irresponsible filmmakers have completely misinterpreted the facts with an intention to project Pakistan ISI in good light.  In the movie it is shown that Salman Khan (RAW agent) takes the help of Katrina Kaif (Pakistani ISI) to rescue nurses from ISIS terrorists. How can the ISI which is killing our soldiers and disrupting peace in Kashmir help the Indian RAW agency which is their biggest enemy. Infact the filmmakers have depicted the RAW agency as incapable and given upper hand to ISI.This is nothing but a typical D-mafia plan to malign India and misguide the Nation. Looks like they are back with their same old agenda of sowing seeds of Aman Ki Asha through movies just to pacify India and Indians who are annoyed with Pakistan’s behavior. And it was none other than National Security Advisor Ajit Doval who took the responsibility of the entire operation in Iraq. He flew to on 25 June 2014 to hold high level talks with Iraq military officials and personally monitor the situation and made sure every Indian returned safe to their country.

It is a shame that one of the best intelligence agent like Ajit Doval and the the RAW agency itself has been maligned and used by Bollywood for their vested interest and to please their bosses in Pakistan!