The three masterstrokes that can gain BJP 300 seats in 2019 Lok Sbha elections, will BJP achieve it?

Fake News and Lies spread by Alt News’s founders! How genuine is the self proclaimed fact-checker Pratik Sinha and..

The three masterstrokes that can..

Most of us would have read a very famous Novel, ‘To Sir, With Love’, an autobiography by E. R. Braithwaite. The novel was based on true incidents of his life where Braithwaite takes a job of a teacher and how he transforms the most stubborn students in his class to a well mannered civilized people. Although the novel takes a different turn later, here is a partly similar story from Tamil Nadu which has shown the deep affection and respect towards a teacher from his students.

For these innocent students, their teacher Bhagwan is their inspiration and motivation. This young 28-year-old teacher was getting ready to walk out of the gates of government high school in Velliagaram, Tamil Nadu. But he was stopped with hundreds of children who hugged him and pleaded him not to leave the school. These young kids started crying, weeping and pleading him not to go out. All this happened because of a transfer order was given to teacher Bhagwan. 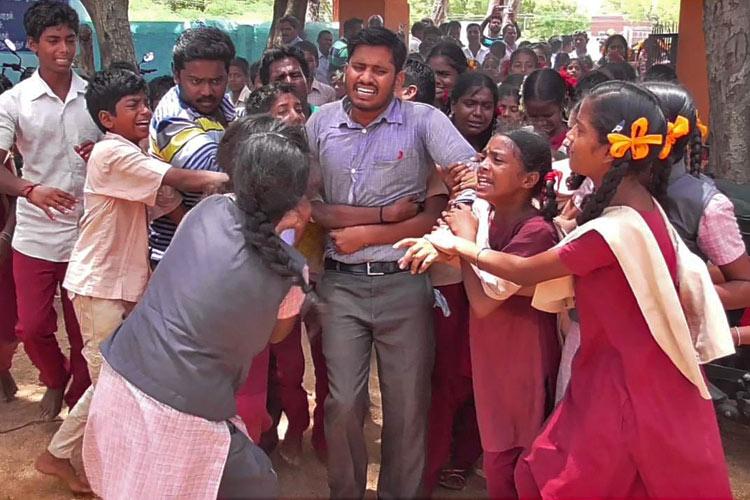 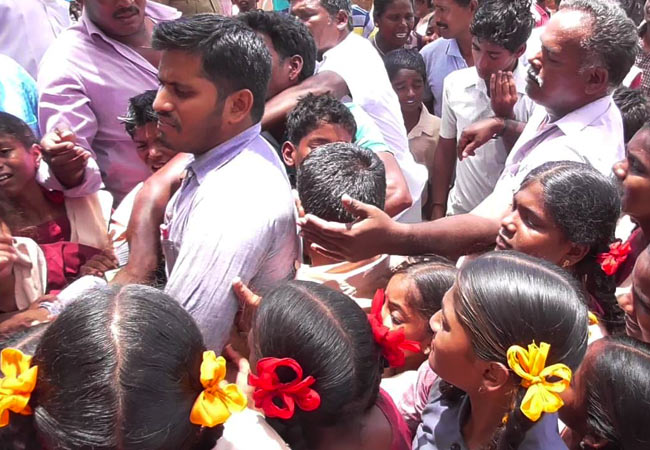 Bhagwan who was working as the English Teacher in the Government High School was transferred from Veliagaram to Tiruttani following a shortage of staff in Tiruttani. But the deep affection and love he built with his students prevented him from leaving the school. An instance of true affection towards teacher which we hardly get to see these was shown by the students of Veligaram Government high school. The scene brought tears in the eyes of all the teachers and parents who assembled there.

Bhagwan who was teaching English from Class 6 to 10th was favourite to all his students. According to the students, he took keen interest to teach his students and was very supportive in all aspects. He was always there to clear doubts and encouraged them in every way.

“Many of us were not comfortable with English but with his encouragement, we were able to improve. He was always available to clear doubts at any time of the day and we could call him even late in the evenings after the special classes,” said Tamilarasan, a student.

“We don’t want him to be transferred. He has been one of the most supportive staff members and has been like a brother to many of us,” said Nithya, a student. Not every teacher can boast of such love from students. “But then, not all teachers are Bhagawan Sir,” say his students. In a matter of four years, the teacher has formed long-lasting friendships with his students, comforting the teens as brother, ally and guide (Times Report).

Bhagwan not just taught what was in the syllabus, but he took interest to teach us GK, social service, developing skills and prepare for competitive exams and focused on employment-oriented education. He helped us to visit museums and learn new things which we had never seen before said another student.

Looking at the plight of students, the parents also joined the chorus and requested the education department to cancel his transfer order. The children even protested by not attending the classes for a day and demanded the teacher be brought back.

Principal A Aravind said that he had submitted a representation to officials of the education department based on the requests by parents and students. “We have requested the department if there is a possibility of retaining the teacher. He is one of the best teachers we have, completely involving himself in teaching students. During special classes that would go beyond school hours, he would help in arranging food for students and had been overall very friendly,” he said. (Times Report).

The teacher Bhagwan said, the children were hugging me and crying, they even started falling on my feet, refusing to let me go, watching this, even I broke down and took them to a hall and consoled them that I would return after few days. 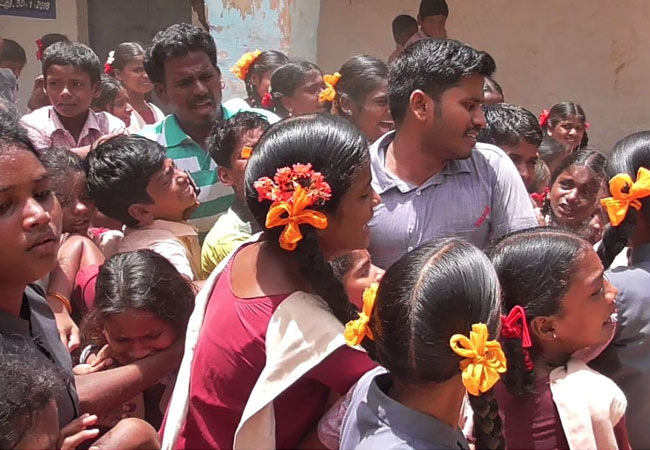 Hearing the heart touching story, the bureaucrats in the Education department were moved and said they will rethink about the transfer order. However, no official statement has been given by the department.

A rare story in the present day, where true values, affection and love is fasting losing their meaning! We wish our schools had more teachers like Bhagwan.