Unveiling the Untold story of “Shanta”- the elder sister of Lord Sri Ram and the reason behind why she..

Unveiling the Untold story of..

Located in the Prabhas Kshetranear Veraval in Saurashtra on the western coast of Gujarat, “Bhalka Tirtha”, is the place where Lord Sri Krishna took his last breath and left the earth and moved towards heavenly abode. An act referred to in the puranas as “Shri Krishn Neejdham Prasthan Leela”.

According to Puranic sources, Krishna’s disappearance marked the end of Dvapara Yuga and the start of Kali Yuga, which is dated to February 17/18, 3102 BCE.

“Bhalka Tirtha” is situated almost a few kilometers away from the Somnath temple. But people hardly are aware about this Holy shrine depicting one of the greatest episodes of Hindu Dharma. The temple is eagerly waiting for the level of recognition it deserves. Presently the government has planned to develop this temple also into a major tourist attraction.

Bhalka Tirth is one of the major pilgrim attractions situated in the vicinity of Somnath, at a distance of 5 Km on Prabhas- Veraval highway. Here we find the deity of Lord Krishna in a reclining posture. Right behind his idol, there lies a Peepal tree also where Lord Krishna was shot.The Banyan tree is said to be the same place where Lord Krishna left to heavenly abode with deep pain.

The temple is famous for Lord Krishna, as he spent his last few hours there. It is the same place where he was hit by an arrow shot in his left foot followed by a curse given by Gandhari to Krishna. 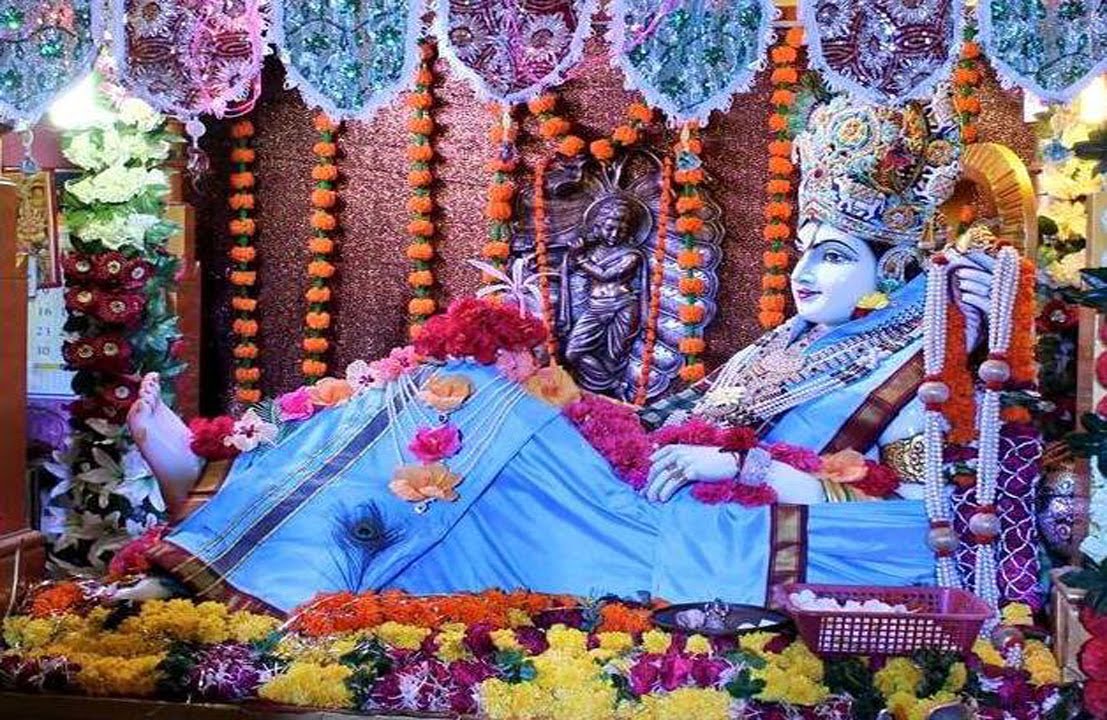 As per mentioned in Mahabharata, the tale goes like..

As heard and read for years along, Kurukshetra war was fought between the Kauravs and the Pandavas to restore Dharma in the land. The Pandavas though less powerful than the Kauravas won the war with the help of Sri Krishna and finally Pandavas became the rulers of Hastinapur with Dharmaraya (Yudhistira) being the King. But Gandhari (mother of Kauravs) who had lost all her sons in the battle cursed Lord Krishna and all the Yadava kingdom to die a painful death just like her sons saying “you may die a painful death, a death that no one would have heard or seen,” for which Krishna had replied “all your wishes will indeed come true mother, because you are a virtuous lady.”

The Mahabharata also narrates the story of a hunter who becomes an instrument for Krishna’s departure from the world and also fulfiiling Gandhari’s curse to Krishna. The hunter “Jara”, mistook Krishna’s partly visible left foot for that of a deer, and shot an arrow, wounding him mortally. After he realised the mistake, while still bleeding, Krishna told Jara, “O Jara, you were Bali in your previous birth, killed by myself as Rama in Tretayuga.

Here you had a chance to even it and since all acts in this world are done as desired by me, you need not worry for this”. Then Krishna, with his physical body ascended back to his eternal abode, Goloka vrindavan and this event marks departure of Krishna from the earth. The news was conveyed to Hastinapur and Dwaraka by eyewitnesses to this event.