While Naxals get bail within hours, a postman who was accused of stealing Rs 57 and suspended from job gets..

Not just Narendra Modi, Maoists wanted assassination of Amit Shah and Rajnath Singh too, planned to buy Grenades and..

While Naxals get bail within..

The movements of Rahul Gandhi with China has caused a great concern to the country. Off late, seems like Rahul Gandhi has become unusually close with the Chinese for reasons known to him. Although we know that the Nehru-Gandhi family was working with the Chinese connection since many decades, most of their movement was kept hidden.

The Embassy of the People’s Republic of China in India presents compliments to the Ministry of External Affairs of the Government of the Republic of India and has the honor to inform the latter that Mr. ZHOU Yuyun, Counsellor of Embassy of China, wishes to apply for a temporary pass for entry into the IGA International airport to see off Shri Rahul Gandhi, President of Indian National Congress, departure by Flight Indigo 6E31, at 11:45 am on August 31st. 2018.

It would be highly appreciated if the esteemed Ministry could kindly notify the related departments and grant temporary passes for the entry into the IGA international airport to Mr. ZHOU Yuyun, Counsellor of China Embassy.

The Embassy of the People’s Republic of China in India avails itself of this opportunity to renew to the Ministry of External Affairs of India the assurances of its highest consideration.” 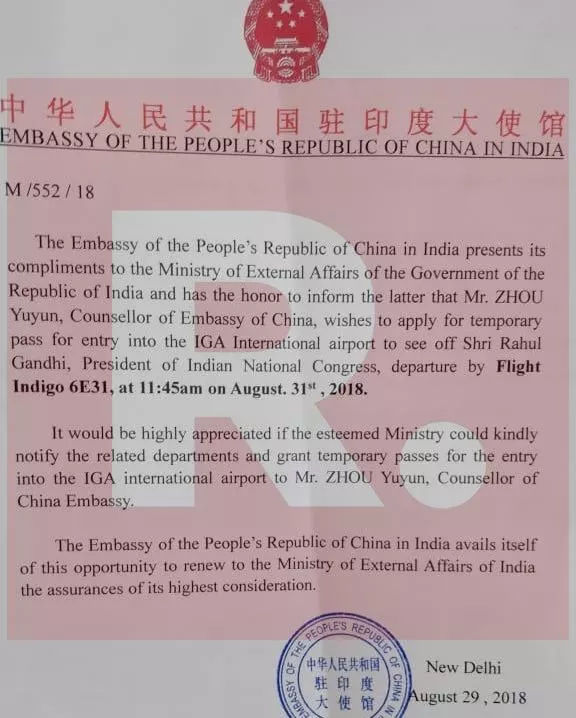 So, what was the need for Rahul Gandhi to have an ceremonial reception from the Chinese.

His move was indeed a surprise to the entire country. Earlier too Rahul Gandhi has taken sides with China and degraded our country in international platform. While the Doklam issue was at its peak, Rahul Gandhi had secretly met the Chinese envoy which raised everyone’s eyebrows.

Rahul Gandhi initially had denied his meeting with Chinese envoy but when China clarified that they met Rahul Gandhi, he sheepishly agreed that he met. Dr Sambit Patra of the BJP even reminded Rahul Gandhi and Sonia Gandhi as to how they were invited by the Chinese premier and given reservation equivalent to Chinese Premier. It is well known that his party leader had collected funds to the Chinese army during the 1962 war against Indian soldiers and still managed to get into the IFS position in the Indian government.

So, Rahul Gandhi has consistently been taking sides for the Chinese, putting National interest at stake for his political gains. It is unfortunate to know that the grand old Party’s president has some fishy relation with the Chinese which may become a major threat to India and its security. Given the records of Congress supporting Maoists-naxals and getting funds from Communists country’s for their activities could make anyone doubt the agenda of Congress in every way.

Rahul Gandhi should make his stand clear as to why he has so much love for China and what is his connection with that country.

Another self-goal by Rahul Gandhi’s close aide! Here’s how Jignesh Mevani got exposed while spreading lies about PM Modi No relief for Urban Naxals , lobby goes to the extent of threatening CJI Deepak Misra! Did PM Modi really favored Anil Ambani? Everyone will be stunned after knowing the inside story What are the reasons for the continuous downfall of AAP? Why is Arvind Kejriwal on the verge of disappearing from Indian politics?