Why did the UN choose..

In a shocking incident, Uttar..

During Congress regime, we used to always discuss about the number of scams coming up and always rightly expected the new one to be bigger than the previous one. We always complained about everyday issues such as Corruption, Black Money, Water Scarcity, Lack of Electricity, Poor Roads and Lack of Employment etc knowing that nothing was going to change with Congress in power.

But, what do we talk about now? We are discussing about ISRO launching record number of satellites, India being a superpower in the world, taking bold stand even against world powers and a lot more. What could be more severe for a nation that even after 70 years of Independence, its people are casting their votes based on caste, religion and money distributed? What makes Congress have that strong hold in India?

Now wait a second, while we blame Congress and the Dynasty family that it has done nothing for the country since the time of Independence, there are a couple of things that INC has done it better than the BJP Party!
Yes, you heard it right. The Congress has mastered in administrating some of the things, which the BJP also has failed to have control upon.

This is what Congress has done better than BJP, Fooled Indians..

The Dynasty holder, Indira Gandhi gave the slogan of – “Gareebi Hatao”. While Grandmother says remove Poverty, her Grandson after 2 decades Rahul Gandhi says that Poverty is a state of mind! Each member of the Dynasty has a different slogan to give the crowd of India. But none of the slogans have been implemented nor seen benefiting us.

Yes we have come very far from where we started in 1947, but how many times did you see any vision being implemented in a systematic way among the Congress party? Did you ever see them fighting for common men? All they have done is politics since all these years. All that they are doing is opposing PM Modi and nothing else other than that.

Rahul Gandhi made his entry into Twitter in early the 2017 and within no time he reached to a Million followers. Have you ever wondered how? As per ANI reports, Rahul Gandhi’s Account, “Office Of RG” was heavily followed and retweeted from the accounts located in Central Asia. Recently when twitter deleted fake accounts Rahul Gandhi lost about 13,000 followers that moment and the count went on to increase later.

Rajya Sabha TV was one medium that Congress could make the best use of. Being Chairman of Rajya Sabha Hamid Ansari had authority over Rajya sabha TV. Thus he continuously paid ‘The WIRE’ to run a show and constantly showed the economy in bad light.

MK Venu is the co-founder of the wire. To all Taxpayers, your money was used to show the Central Government in bad light by the Congress owned channel. Many people believe it completely and think that BJP is doing nothing because news comes from official source.

Siddharth Varadarajan is former editor of “The Hindu” and now editor of “The Wire”. Again Rs. 14,40,000 was used of Taxpayers’ money to run fake Anti-govt. news and show ‘democracy is in danger’. 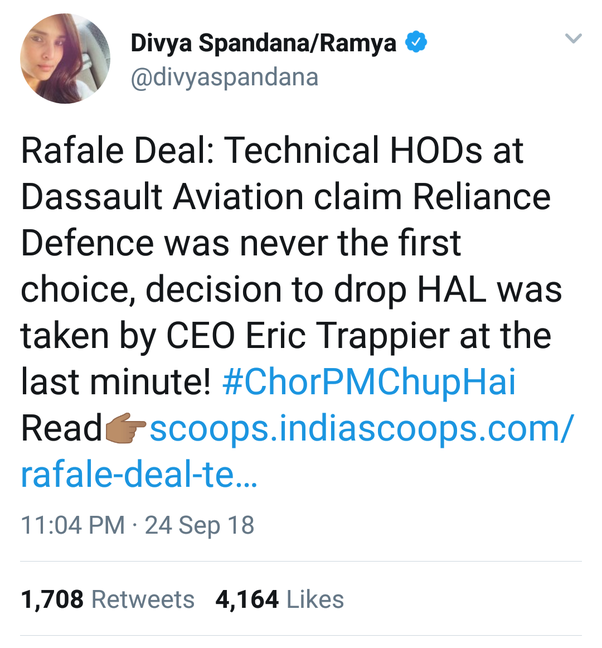 Congress used all the possible means to influence the narrative of people using our own data (Hypocrisy: They protest for data protection). After the closer of Cambridge Analytica, congress stooped so low and started making their pages on Facebook:

Grabbing all the bad light, the Actress turned politician, Divya Spandana, the IT cell head of Congress, former MP, close to Congress President Rahul Gandhi, has her own way of turning and twisting things against PM Modi and his Government. Her website and Facebook page try and make the maximum efforts to spread fake news about PM Modi and the BJP party through illegal means. The Congress has somehow managed to convince people with its strategy and thus achieved its goal in mastering in Success through Wrong path!!