An open letter written by a Christian is going viral! Says, “Archbishop you are wrong and I’ll definitely vote..

An open letter written by..

Latest: After massive outrage by..

Yesterday we witnessed one of the worst protests in the country which resulted in the death of 12 people. The place Tuticorin literally turned into a battle field where protestors were seen bringing down the entire place to muds.

The question is whether this sort of violence was really necessary? Who really were the people who wanted to turn a peaceful march into war and who benefited by all these deaths and violence. The whole protests was taken out to marked the Hundred day protest against the Copper Company Sterlite. The Sterlite company is a copper manufacturing plant which started its operation in the year 1994. It belongs to the parent organisation of the Vedanta group.

Since the time of its inception, there has been various complaints against the company which is said to have violated many environmental norms. But the sad part is, those political parties who are giving moral lectures today are the same people who have helped this company flourish and  helped them escape all environmental laws.

It was in the year 1994, the first protests against Sterlite company was initiated which was said to have violated many norms causing grave concerns to environment. But the then government of J Jayalalaitha never took any action against the company but rather ensured that the protests were withdrawn. Again in the year 1996, there was massive protests against the company for neglecting environmental norms which was affecting the people around the area. But then it was the DMK government under M Karunanidhi with the help of Congress suppressed the protests and helped the company sail through all legal clearance.

In 1998, again a petition was filed against the company in Madras High Court which had then stayed the operations of the plant stating that the company had not adhered to single norms. But however The National Environment Engineering Research Institute (NEERI) had submitted a reported saying that there was no violation of laws which helped the Sterlite company to restart its operations.

The company since then grew with huge manufacturing capacity and finally in the year 2004, the Sterlite sent a proposal of expansion to the then Congress lead UPA government to clear the proposal. The Congress without objecting even once gave green signal to the company to expand its operation. The DMK leader A Raja was the environment minister who raised no objections against the company.

But this is not the shocking part…..the then Finance Minister of India P Chidambaram was selected as one of the Directors for the same Vedanta Group. This news was confirmed by Dr Subramanian Swamy as well. It was during his period, the company again asked for an expansion to produce 4.2 Lakh tonnes copper a year. The environmental clearance was again sanctioned by the same Congress government after they won the 2009 general elections. In the year 2013, the Supreme Court had raised objections over its operations which thus imposed a fine of Rs 100 crore.

In 2017, Tamil Nadu Pollution Control Board (TNPCB) found gross violation of rules and thus recommended the shut down of the company. But the National Green Tribunal rejected all complaints against the company and allowed the functioning. So, the protests against the company has been going on since decades and every party AIADMK, DMK and mainly Congress have been involved in helping the Copper company.

But the real question is how did the protest turn violent and who were behind it?!

May 22 marked the 100th day of protests for which massive rallies were planned by many groups. According to reports, it was well informed that few groups were planning for violence which made the Vedanta group approach High court requesting them to implement Section 144 in the area. The High Court on May 18 analysed the facts and came to a conclusion that the chances of protests going violent are more and hence instructed the state government to impose section 144.

It was found that the protestors were planning to attack the collectors building which was opposed  by the Superintendent of Police in a meeting.  22 organisations who had attended the meeting agreed to the police and shifted their protest site to SAV High School. But there were few other organisations which did not attend the meeting, among those were Makkal Adhigaram and Puratchi Illaignar Munnani who are said to have naxal and Church connections.

The protests started in four different places in Tuticorin, in two places where the protests was lead by DMK and another group which was lead by villagers were stopped by the police successfully. But the problem started when the Church people joined the march from Church of The Lady of Snow where suddenly over 10,000 people gathered. This crowd was most violent which started attacking the police indiscriminately and marched towards the collectors office. They burnt all the vehicles and public property which lead to heavy chaos.

Around 200-300 people of the Church crowd infiltrated into the villagers groups and started attacking police which lead to massive violence. This triggered the police to indulge in lati charge. This crowd marched towards the employees colony in the Sterlite plant area and torched all vehicles. When the fire engines were called, they did not allow the fire engine to pass the area and started damaging the vehicle. 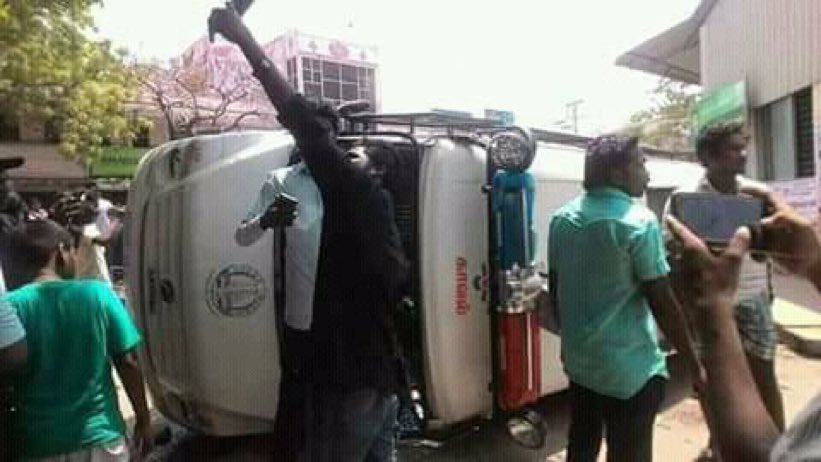 The entire place turned into a war zone within minutes after the Church entered the protests. According to Intelligence Bureau which had submitted report few days before the protests , it had clearly stated that there were few organisation which were galvanizing massive crowd and their intention was to create riots and violence. But the matter was not addressed by the TN government which was grave mistake.

What is the background of this MAKKAL ADHIKARAM? 1st poster calling people to gather in large numbers to protest against #Sterlite! 2nd poster clearly instigating violence, reads lets make TN a battle field till Sterlite is closed, plant is shut since March! #SterliteProtest. pic.twitter.com/8yDMw2OW6X

The IB had also submitted proof that the posters circulated was clear that they were planning for violence. This was confirmed when the posters were put in open 2-3 days before the protest. These were the people who really turned the peaceful protests into violence. It was when situation went out of control, the police started firing finding no other way.

If we remember, few months back, the same thing happened during Jallikattu protests where the peaceful protests were hijacked by the Missionaries leading into chaos and riot like situation.

So, Rahul Gandhi who is now blaming the RSS/BJP should first look into the history of his own government and question why did the Congress give clearance to this company despite there were many complaints against them. Why did his own minister P Chidambaram serve as the director for nearly 10 years and helped them sail through legal process?

Take a look how police were attacked!

A police officer brutally attacked almost to death by thugs in the name of protestors in thoothukudi 🙁#SterliteProtest #TNJallianwalabagh #StandTogether pic.twitter.com/NvsjgnMvkF

A cop is brutally being beaten by thugs during #SterliteProtest pic.twitter.com/Swlebkt5Gf

Now, people can decide whether this should be called peaceful, they should decide whether Congress and especially Rahul Gandhi has any morality to speak about the situation!