After Trilochan Mahato, another BJP worker brutally killed in West Bengal! Now where is the candle light protest from..

Indians’ blood will boil after watching this video! Look what was done to the CRPF Jawans by the stone..

After Trilochan Mahato, another BJP..

Indians’ blood will boil after..

Just a year back, there was a massive agitation by farmers in Mandsaur, Madhya Pradesh which lead to violence resulting in the death of few people. The protests was started by few farmers who demanded MSP for their crops. But what turned out to be was a political gimmick by some vested groups who wanted to utilize the situation for their benefit.

The big question what bothered people was, why did farmers go on a strike in a bumper crop year of 2017?!  The real reason was that farmers did not organise the protest, but the real engine behind them was shameless crook politicians who in the name of farmers orchestrated the violence.

Now these same crooks are back in business just a year later, same time and in same place provoking farmers to go on a protest just before Madhya Pradesh, Rajashthan goes for polls later this year. . All of a sudden some farmers organisation have announced that they will be holding strikes in different states like Maharashtra, Haryana, Punjab, Madhya Pradesh and Rajashthan against the state government demanding them to give Minimum Support Price for their crops. Their other demands includes, free power supply, water supply, support ethanol as alternate fuel and implement Swaminathan Commission report.

Demanding MSP or going on protests is every right of a farmer, but what has made people doubt their intention is the their goon attitude.

Farmers are regarded as the backbone of the country, they are respected because of the hard work they do. But take a look at these people who call themselves farmers wasting tons of milk which could have helped thousands of people, take a look as to how they are wasting fruits and vegetables and preventing them from reaching the markets and people. 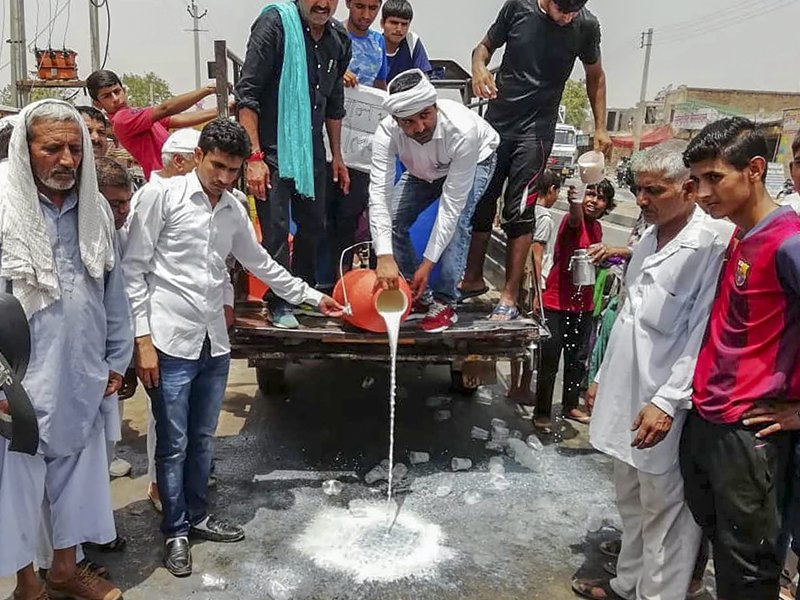 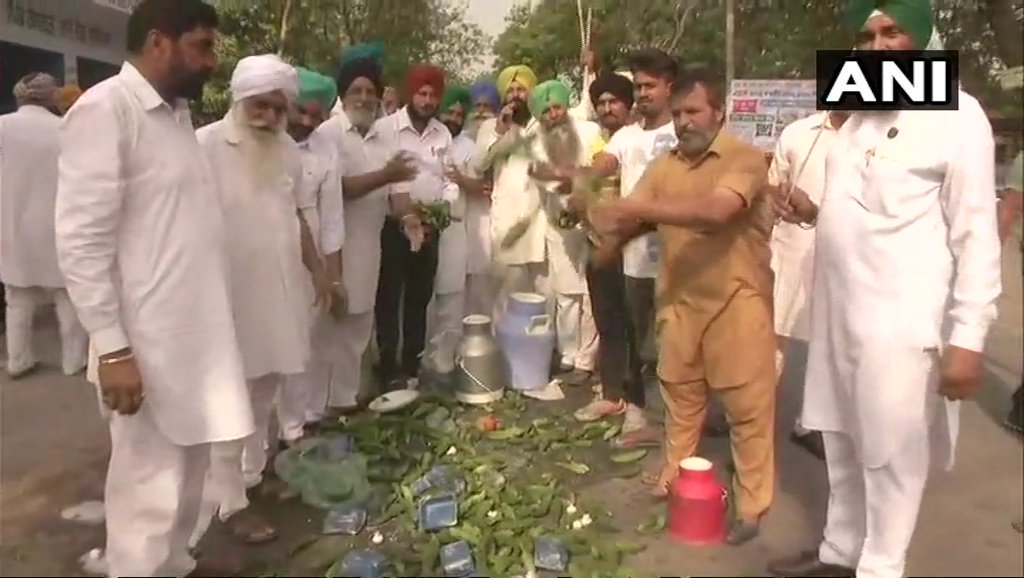 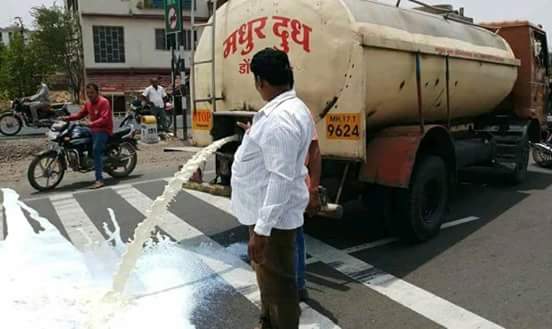 A real farmer knows the value of the food and would never go to an extent of spilling tons of milk on streets and wasting it. But the real culprits who mislead people are the middle man who cheat both farmers and mint money from politicians in the name of strikes.

If there is bumper crop, the mandi owners and middleman buy crops and vegetables for very low price from farmers and then sell them to a greater price in the market. If there is no good harvest, they still buy the crops for low prices and hide them to create artificial shortage and raise the prices of all Vegetables and pulses 10-20 times high. So either way they make profit. In Maharashtra, more than 60% of the Mandis are owned by Sharad Pawar and Congress top leaders.

These middle men are the ones who take huge money from politicians and organise strikes in the name of farmers.

Take a look how they are snatching milk from poor people and wasting it…Is this what farmers do?!

Do u know why we are calling this politically motivated strike by #MisguidedFarmers (INC Paid Agents).?

Here is the upsetting fixed show with reliable proof from Punjab, Milk spilled on road instead of total denial & disagreement by Milkman/Farmer.??#congressPlansKisanRiots pic.twitter.com/OPNzPKgI5k

Just few days back, Rahul Gandhi had announced that he will visit Mandsaur to kick start his campaign for the Madhya Pradesh elections. He also said that he will organise one year anniversary of the farmers strike. Just days after he announced, the farmers have given a call for strikes. So, why did Rahul Gandhi pick the same area where the Congress organized strikes last year?

The other important issue to be noted is, Mandsaur is that place which is the hot hub of OPIUM production. Yes, the major crop of the entire Mandsaur is not vegetables or pulses but OPIUM (poppy or marijuana drugs). 1 kilo OPIUM cost Rs 3-5 Crore!

Do you think these farmers need MINIMUM SUPPORT PRICE??? The man who is leading the farmers protest in Mandsaur is Faiaz Khan, the same person who organised protests last year. This man is none other than a close aide of Digvijay Singh and runs a opium mafia in Madhya Pradesh.

So, is it mere co-incidence that Congress is supporting the so called farmers protests and every time it takes violent turn. While these crooks of Congress are hiring people to organise protests in the name of farmer, real farmers in Madhya Pradesh have given statement to many media saying that they have no problem about MSP and they do not want any violence or strikes in their place. They have openly said that this is a political conspiracy to disrupt peace in the area.

Farmers in Bhopal say, 'This feels like a normal day, we are not facing any problem. We don't want any type of agitation & we are not even a part of it. This is a conspiracy of the political parties'. pic.twitter.com/BPDW82M7kj

With elections just around the corner, the Congress is desperately looking for reasons to attack Modi government. The Congress which has no support base in Madhya Pradesh wants an issue which can dent the image of BJP. On the other hand MP CM Shivraj Singh Chouhan has become most popular CM recently with his many developmental plans. So, the orchestrated strikes and protests by Congress is not for farmers but for themselves to malign the BJP government and to score political brownie points. If the protests were really genuine, those people would not have wasted thousand of liters milk on streets but would have distributed to poor people. But their intention is to make people suffer so that the prices go up and people ultimately blame PM Modi for high prices.

Check how they are laughing wasting milk!