Mind Blowing analysis by an..

The Mahabharata was one of the largest wars ever fought and armies used a scale of measure known as Akshauhini to measure strength. As single Akshauhini consisted of 21,870 chariots, 21,870 elephants; 65,610 cavalry and 109,350 infantry. Now, it is said that over the course of the war, 18-20 Akshauhini Senas (armies) were killed. There were enough men to spare for a formation like the Chakravyuha (Padmavyuha). 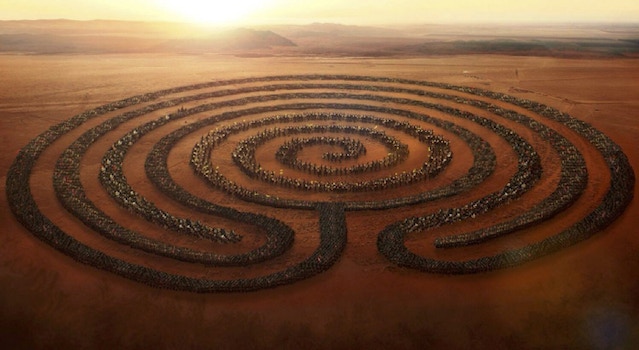 What exactly was the Chakra-Vyuha or Padma-Vyuha?

The Padmavyuha is a spinning death machine on the battlefield. It has the capability to maintain its form while slowly engulfing enemy soldiers into it where they are surely doomed to fall to an endless alley of soldiers stabbing at them from every direction.

The inner layers were made of soldiers, each stronger than the ones on the immediate outer layer. Let us use a gaming terminology and call the warriors as levels. Level 7 being the strongest, and lower level warriors at the outside.

Here is what would happen to anyone entering through the mouth (now imagine the same thing happening DURING WAR)….

Think about it… the warrior is in a constant state of battle while the formation circles around him. He keeps getting tired, while the further inside he goes, the less worn out fighters he meets! Both physically and mentally, this makes it difficult for the warrior who has entered.

Now, the Chakravyuh was a brilliant military tactic. Basically, it was a juggernaut. The whole formation continuously spun across the battlefield, continuously fighting, and the moment one member of the formation was killed, there was a sliding motion that propagated from the position held by the killed man, right upto the center of the formation, thus ensuring that at all times, there existed a continuous maze.

A method that unarguably most people would try would be to attack the person right in front of them. Now, what would happen is that while the warrior may successfully manage to kill the man in front of him, but his position is instantly taken over by the man to his right, thereby making a breach impossible.

So, here is the technique Abhimanyu used (apparently he learnt about it as a foetus. Abhimanyu, the son of the great archer Arjuna, took out, in quick succession the people to the left and right instead of up front.
Now, what this did was, create a movement of soldiers to cover up the gaps, but for a brief period, left the position right in front of Abhimanyu open.

Now by using this technique, one may assume that he managed to get through the first few levels easily, but on the inside, as the density of warriors increased, the gap created lasted for shorter and shorter periods of time, making it more and more difficult. Also, no doubt, the constant rotation would have started playing mind games, but Abhimanyu’s strategy involved simply creating a path straight through the formation.

Now, the original deal was that Abhimanyu creates gaps and storms in, and other Pandavas follow him. But that plan backfired as Jayadratha (Kauravas’s one and only sister Sushala’s husband) hold all the Pandava brothers and their forces at bay. So, over time, Abhimanyu keeps going deeper and deeper, all alone.

Making it to the center, Abhimanyu had to face a high-density ring on the best warriors on the Kaurava side, both physically and mentally exhausted. Perhaps, he could continue with this same technique to break out as well.
If the Pandavas had followed him in as planned, they would have more warriors on the inside, and breaking out would be easier.

It is said that upon the breach, the whole formation broke and converged upon Abhimanyu, making it one man against a continuous onslaught of others. It is difficult to see how long he could survive the attack with nowhere to escape to. And that is how it ended. Abhimanyu was killed, trapped in a maze with warriors like Drona, Karna, Duryodhana etc.