Now, the Shiv-Bhakt Rahul Gandhi insults Lord Ram and also calls PM Modi as Raavan! Here’s what he did..

Now this is a brain teaser isn’t it? All of us hearing the tales of Ramayana from childhood have thought over this question once in a lifetime. Why didn’t Hanuman bring back Mata Sita along with him when he met her in the Ashoka Vatika in Ravana’s kingdom? He could have brought her back along with him and put an end to the struggles of Lord Sri Ram. Hanuman alone had set fire to the whole Lanka with his tail, why didn’t he think of carrying Sita on his shoulder and bring her back safely to Lord Ram? 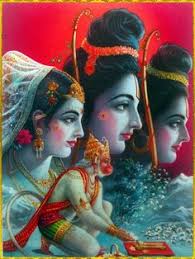 Now let me clear your puzzled minds. It’s not that Hanuman who did not think of getting Sita back along with him. He did think of it and also expressed his thoughts to Sita. Hanuman when he met Sita in the Ashoka Vatika and offered her the finger ring, as a symbol of recognition from Lord Ram, he expressed his thought to her and asked her to come with him. He would take her to Lord Ram.

But Sita strictly refused to this thought from Hanuman. Why? Let’s know what actually happened when Hanuman met Sita.

In Ashoka Vatika, Sita heard the voice of Hanuman with fear and looked up into the tree, and saw the monkey who was eloquent and humble and his eyes glowed like golden fire. Hanuman came down from the tree, ruddy-faced and humbly attired and joined palms to greet Sita. Hanuman introduced himself to Sita. While Hanuman got a little closer, Sita was much afraid as she thought him to be Ravana in disguise. Hanuman tried his best to convince Sita that he was a devotee of Ram and at last when she saw the signet-ring of Ram she got convinced and she was glad and sorry at once.

Sita immediately asked for news of Ram and Hanuman informed her all that had befallen and spoke of Rama and Lakshman. Sita was glad to know that Ram was keeping well and sorry for his grief. Hanuman then suggested Sita to sit on his back so that he could carry her back from Lanka across the sea to Ram. But Sita refused to do so.

On hearing her refusal on this Hanuman answered her back that, he was not any other man but he was her son. There was no other relation between them except that of a mother and a son. And he would take his mother Sita to his father Lord Ram. On hearing this Sita ended up in a dilemma. And she did not know what to do.

She praised his strength and purity of his soul but would not go with him, because she thought she might fall from his back into the sea, especially if the Rakshasas followed them. On more reason behind her refusal that, she would not willingly touch any person other than her husband Ram. Sita also expressed her desire that the glory of her rescue and the destruction of Ravana should go to Lord Rama alone. Hanuman praised her modesty and wisdom and asked for a token of love for Rama.

Then Sita told him of an adventure with a crow, known only to herself and Rama that had befallen long ago at Chitrakuta and she gave Hanuman a jewel from her hair and sent a message to Ram and Lakshman praying them to rescue her. Hanuman took the gem he then bowed to Sita and left from there.

As Mata Sita was a divine form of incarnation of the “Shakti- the highest force in this universe”. No one would have dared to touch her without her own will. Many of us are unaware about it that Sita Mata is also considered to be a reincarnation of Vedavati, whom Ravana had tried to molest while she was under penance, so as to become the consent of Lord Vishnu. It is said that Vedavati then cursed Ravana to become the cause of his destruction in her next birth. It turned to be true when Sita turned to be the reason behind Ravana’s death.

Ramayana is one of the epic tales which describes the virtues of a good husband and wife. Sita did not want any other man to touch her other than her husband. She belongs only to her husband Lord Ram and any other man touching her would be a question to her purity.