Narendra Modi set standards for patriotism way back in 1992!!!

Interesting questions regarding Prime Minister Narendra Modi and his accomplishments are posted on social media. There was one regarding whether or not Narendra Modi is a patriot, and we couldn’t evaluate if the question demanded factual information or was posted to mock the Prime Minister. However, a factual answer posted has answered all questions that might ever come up regarding Narendra Modi’s devotion towards the country and his missions.

The bold display of intense patriotism towards India by Narendra Modi had become evident way back in 1992, when he was nothing more than an ambitious member of the BJP. If we might remember, 1992 was the time when Kashmir saw one of the most extreme revolts by people who called themselves militants. The revolts were carried out through extremist moves such as bombing of Kashmir, and insulting the tricolour by cleaning cars and shoes with it, and stamping and kicking it in front of cameras was an everyday phenomenon.

At the same time, the BJP organised an ‘Ekta Yatra’ (the tour for unity) which took place through the length of the country – from Kanyakumari to Kashmir. The plan was to officially end the yatra by hoisting the tricolour at the clock tower at Lal Chowk, Kashmir, which was then the hotspot for the militants’ activities. As soon as the yatra reached Hyderabad, there was an open threat issued to the BJP that anyone who tries to ‘make a show out of’ hoisting the tricolour at Lal Chowk would be killed.

When it was expected that legal steps would be taken against this or even BJP would back out in consideration of security, and outspoken radical named Narendra Modi issued an ultimatum to the militants. He stated openly that the flag hoisting will take place at the Lal Chowk on the 26th of January at 8 A.M, and all BJP members will arrive to the clock tower armed only with the tricolour. There shall be no weapons, neither bullet proof jackets, nor an extensive security.

Call it patriotism, or probably even madness – the hoisting event took place just as Narendra Modi had promised. Even after a couple of explosions that took place in the vicinity on 24th of January, the participants of Ekta Yatra assembled at Lal Chowk where the then BJP President Murli Manohar Joshi hoisted the tricolour and marked the end of the yatra. No one dared touch or threaten the Indian patriotic radicals that republic day. 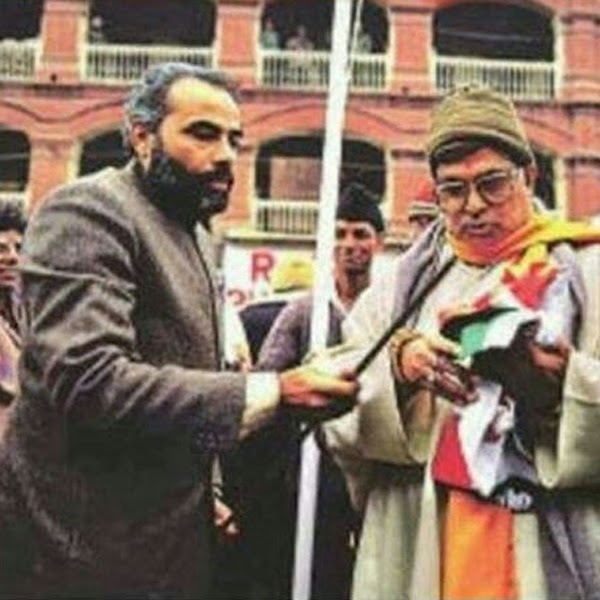 Later addressing the media in the vicinity, Murli Manohar Joshi introduced Narendra Modi to the country and called him the most energetic and promising leader that the country will see. True to his words, Narendra Modi has worked his way to the highest position and highest accomplishment in the history of Indian politics. After the Lal Chowk hoisting, the area was in news for a long time as hoisting the tricolour there was considered to be of high political significance. The flag was hoisted there by BSF or CRPF personnel every year, only to stop in 2009 where the Congress government ruled out its significance and stopped the hoisting.

Well, consider any other leader in the position of Narendra Modi. Even when he had no prominent position to claim, this man had an adamant sense of patriotism that never let him compromise with the commitments made with the country. For a man who did not care of being bombed hoisting the tricolour, there is no unit to measure the level of patriotism. Narendra Modi’s patriotism equals that of a soldier, and there need be no more questions posed on that.