Massive embarrassment for Congress social media head Ramya as her mother revolts against Congress party! Do you know what..

Congress President Rahul Gandhi has been nominated for Oscars, don’t believe? Then read this report to know in which..

Today I do not like to show any respect or regard to the person who called a section of people they do not belong to Hindu Religion! This open letter is directly addressed to Rahul Gandhi who has shown utter disregard to Lingayats and Veerashiava community.

Mr Rahul Gandhi, your party yesterday declared that they will grant Lingayats a separate religion status and declared them non Hindus from here after. The biggest question which raises is who gave you the authority to call Ligayats as non Hindus? Ligayat-Veerashiva community are those people who worship Lord Shiva and follow the preaching of Lord Basavershwara.

Lord Basavershwara who was a social reformer of the 12th century was the first person to abolish caste system in the society. He was the person who abolished untouchability and considered every human being as one. Never in his life time did he say that Ligayat and Veerashivas are different and they should be separated. The names which were given to represent the profession of people’s work was turned into caste system which became the curse for the country. Baseveshwara was against these practices and thus encouraged inter caste marriages and called for dignity of labour which was spoken for the first time in the world. He spoke about democracy, respect for women and induction of women in decision making process. Before the world could even realise the concept of democracy, Basavanna had spoken about democracy in the Anubhava Mantapa (Experience Centre) and declared equal opportunity to all.

His fight to abolish caste became a revolution in the history of India which united the people of all castes and creed. He declared that we all belong to the common roots of Sanatana Dharma or Hinduism which is a Way of Life! He taught us that while we all have common goals and common principles, the route to achieve it is different. But our base and existence lies in the essence of Sanatana Dharma.

When such is the teachings of Lord Basaveshwara, how did you and your party declare that Ligayats are not Hindus?!

We very well know that the division of Ligayat and Veerashaiva is a long term strategy of your party to not just divide Hindus but to disintegrate the Hindu religion in India. Mr. Rahul Gandhi, we also know that the idea to divide Ligayats was started by a man called Channappa D. Uttangi  who called himself a Kannada poet. This man took up Theological studies at the Basel Seminary and joined the Basel Mission as an Evangelist (Christian gospel teacher ) in 1908. From the year 1908, he joined hands with British and started spreading the message of Jesus and Christianity in Hindu dominated places like Varanasi. He wrote many books of Christianity and gave it Hindu names in order to misguide people. These were  such books which totally misinterpreted and misrepresented to fool Hindus and especially Ligayats….Mrityunjaya (An account of the Last Days of Jesus Christ) (1963), Lingayatism and Christianity (1969), Anubhava Mantapa: The heart of Virashaivism (1932). All his books were aimed at dividing the Hindu society.

History has many evidence which shows he was a British stooge who was propped up to exploit caste system and divide Hindus. If there is anyone who encouraged caste system in Indian society it was the British who wanted to split Hindus to secure their place in the country. While all the Hindu caste in India had same principles with different traditions, the British widened the gap between them and tried to cut them from the roots of Hinduism. Channappa D. Uttangi‘s followers Kalburgi and  Hiremallur Ishwaran are the same people who sent proposals to Congress government to separate Lingayats from Hindu community.

This same concept is being used by these Congress which has more British-Christain roots than Indian roots. It was Nehru who carried the legacy of British by first dividing the country, then divided states, divided people in the name of caste and religion. Today you Rahul Gandhi has taken his place and literally breaking the country into bits and pieces.

Let me inform the people that you along with the Southern Baptish Church and Joshua Missionary had tried to lure Lingayats in some parts of North and south Karnataka regions. These Christian missionaries had told Ligayats to accept minority status to reap all government benefits and asked them to come out of Hinduism as it would yield no benefits. They had presented them with Bible and the Uttangi’s book Lingayatism and Christianity. Am I right Mr Rahul Gandhi???

Rahul Gandhi you very well know that the Supreme Court will not approve minority status for Lingayats as National Commission for Minorities 1992 act does not provide any provisions to induct new religion into minority status. This act was passed when your own Congress government was in power. So this entire episode of granting minority status is just a GIMMICK to divide Hindus and gain few extra votes in the name of Lingayats. Am I right Rahul Gandhi???

This is not just a political ploy but is a sinister plan to remove Hinduism in the India. You Rahul Gandhi who calls yourself as Shiv Bhakt should first answer do you respect Basaveshwara, if so then show in which stance or which preaching of Basaveshwara has he told that Lingayats do not belong to Hinduism??

Rahul Gandhi, the Siddaganga Mutt Sivakumara Swamiji whom Karnataka people consider as Living God had requested the political parties not to destroy Hindu religion, he had requested your Chief Minister Siddaramaiah not to break Ligayat community, but you people who cant even show minimum respect for such noble soul went ahead and divided the Lingayats. If you had no respect for a man like Shivakumara Swamiji, then why did your Chief Minister rant nonsense that he is a great admirer of Shivakumara Swamiji and lied to people that he respects his words??! 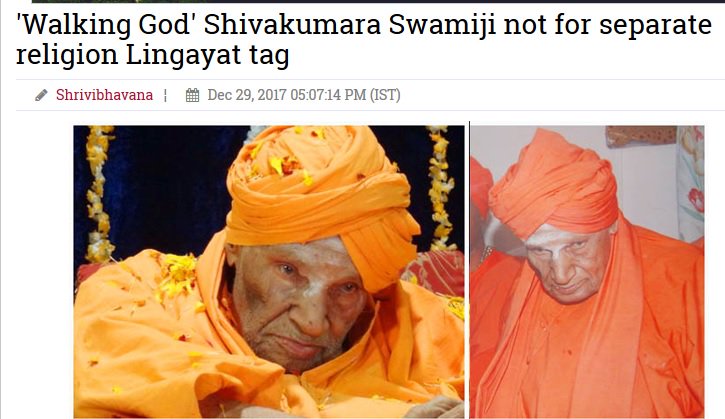 Remember that for winning an elections you are destroying the Hindu community. Well we should not be surprised given your family background whose main intention was to remove Hindu religion from India. First you called Hindus terrorists said Hinduism is a greater threat than Islamic terrorists, then your party gave us new name Saffron terror, you said those who visit temple are the ones who mock ladies, you said Hindu majority is dangerous to the country, you jailed innocent people just because they wore a saffron robe, when nothing succeeded, you are now dividing the Hindu society calling Ligayats non Hindus.

People are watching you Rahul Gandhi. Our country, our culture and our potential is not so weak that we will let an Italian family give us certificate on our Hindu credentials. We have our people who will solve our problems, we have scholars, religious heads who have the capacity to sort out the issue and we do not require a lady who came from Italy to decide about Hindu religion!!!