All India Muslim Personal Law Board is Challenging The Verdict on Ayodhya Delivered by The Apex Court Of India!..

Remember the first assignment which Amit Shah took as soon as he assumed office as Union Homework Minister? While presenting UAPA amendment bill, Amit Shah has stated that Zero tolerance to terrorism! And his recent direction to CRPF, is a great step towards ending extremism!

With a strength of more than 300,000 personnel, the CRPF is designated as the lead force for internal security duties and anti-Maoist operations.

He also directed that effective action should be taken against the terrorists in Jammu and Kashmir and law and order should be maintained.

The Home Minister was given a detailed presentation by CRPF Director General Rajeev Rai Bhatnagar. High ranking officials of the Ministry as well as CRPF were present on the occasion.

He also directed that the civic action programmes be carried out, besides organising sports and tours.

The CRPF should also reach out to the villagers and assist them in obtaining the benefits of many central schemes which are applicable to them, he said.

The minister said proper winter provisioning for the forces should be done and their welfare looked after.

He also directed that the health of the jawans and their families should be well looked after.

Digital health-cards should be made and there should be periodical health checks also for their families.

The Home Minister directed that senior officers should visit the families of martyrs and spend time with them understanding their requirements so that their problems are resolved.

“A database should also be made of the martyrs’ families and their basic issues and grievances should be systematically addressed.

He expressed concern about the hard and long deployment of jawans in difficult theatres and discussed various measures for giving them relief and an opportunity to stay with their families.

The minister directed that the infrastructure of CRPF and their residential quarters should be improved and more quarters at different duty locations should be constructed.

Noting that cutting edge technologies and the state-of-art equipments should be identified which are required for operational purposes, he emphasised the Make-in-India effort and also asked the forces to use Khadi and indigenously made products.

He directed the senior officers to reach out to their juniors and jawans so as to able to appreciate their issues. 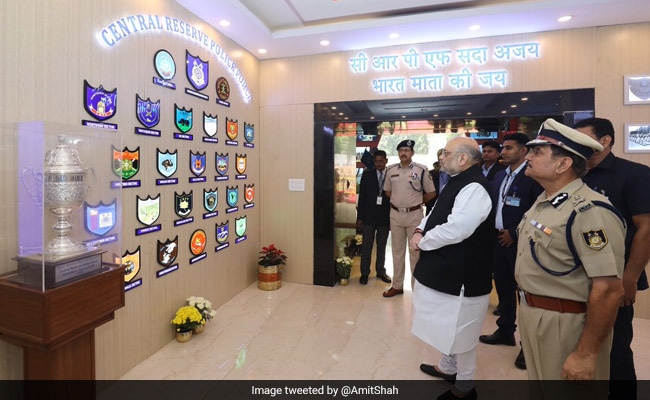 The Home Minister directed the CRPF to carry out an effective and decisive campaign against Left Wing Extremism in the next six months.

Amit Shah discussed, The situation in the Maoist affected states and measures being taken for improving the infrastructure of the camps and measures against improvised explosive devices with the higher officials of CRPF.

He directed the CRPF that action needs to be taken against the urban Naxals and their facilitators.

Why Amit Shah is being decisive in striking naxal and maoist extremism?

We can recount, when Amit Shah presented amendment to UAPA bill in the parliment.

Home Minister Amit Shah had given a strong message in the Lok Sabha, Under the garb of ‘social activism’ and ‘ideological movement’, Maoism — especially ‘urban Naxalism’ and violence against common man, villagers and tribals under its pretext — won’t be tolerated at any cost.

The home minister said that Left Wing Extremism (LWE) began as an ideological movement but later, under the garb of this ideology, Maoists rampantly killed thousands of innocent people, poor and tribals.

Without mincing words, he said that there were social activists who act as ‘Maoist sympathisers’ and such people won’t be spared. “I don’t accept Maoism as an ideological battle…we should rise above parties and ideology when it comes to banning terrorism of any kind,” said Shah.

One may recall, in August 2018, the Pune police had arrested five persons from different cities – Varavara Rao, Sudha Bharadwaj, Gautam Navlakha, Vernon Gonsalves and Arun Ferreira in connection with a probe in the Bhima-Koregaon riots in January 2018. The arrested people were claimed to be ‘top urban Maoists’.

According to the report which has been recovered from the laptop of Urban Naxals case accused Rona Wilson, Gautam  Navlakha named as GN in the report was in touch with several separatists in Kashmir and some commanders of HizbulMujahideen.

Besides killing police and security force personnel, Maoists have killed large number of innocent villagers and tribals by branding them ‘police informers’. In fact, the tribals become victims of the tussle between security forces and Maoists.

This was the first visit of Amit Shah to any force headquarter after he took charge of the Home Ministry and a much needed action against the so called ‘ideological warriors’ has begun… These intellectuals since long had been spewing venom and were inflicting anti national ideas into the young minds. Zero tolerance to any sort of terrorism is a much needed action and Amit Shah has stepped up the game. Why all of a sudden Indians are asking Rahul Gandhi and Sonia Gandhi’s degree certificates? Here’s the hilarious story of how Rahul Gandhi’s aide put him in deep trouble in a bid to attack PM Modi Without kitchen being ready, did Rahul Gandhi inaugurate the cash counter in Indira canteen?